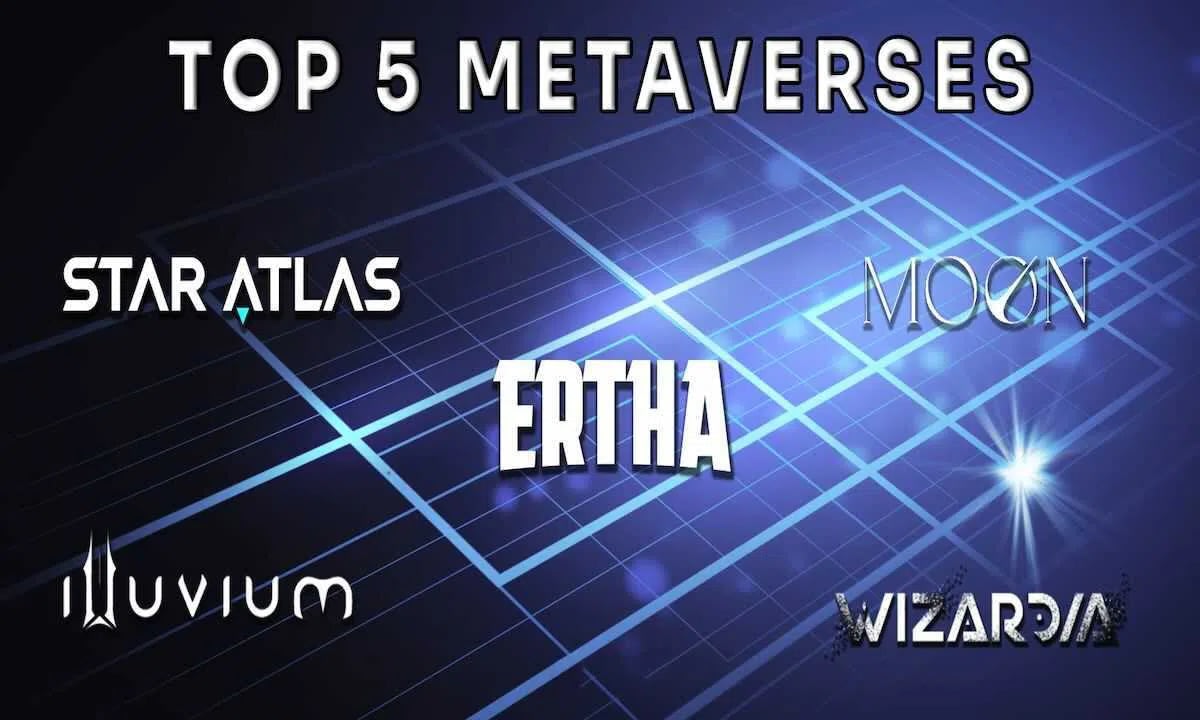 Last year, Facebook rebranded to Meta and announced that they are ‘developing exciting new technologies to help people connect and explore in the metaverse.’

Ever since metaverses have been making mainstream headlines. If you’ve been watching from the sidelines, you’d be forgiven for thinking that you’re late to the party, but that couldn’t be further from the truth.

It’s still very early days for this groundbreaking reimagining of our digital lives. If you’re looking for an easily-digestible introduction to 2022’s top metaverses, we’ve got you covered. In no particular order, here is a to five.

Whilst Decentraland currently reigns supreme as the industry’s biggest metaverse, Ertha could be next in line to the throne. After generating a lot of buzz with its token released earlier this year it has quickly gained traction to become one of the most-anticipated metaverse games.

Ertha is a play-to-earn game in which mankind finds itself on the brink of extinction.

Players must right the wrongs of the past by building a new world, from the ground up. Traverse the globe, develop revenue-generating land plots, and rebuild entire continents from the comfort of your home. The game delivers a unique experience in which players can turn their in-game earnings into real-world income.

Taking inspiration from classic MMO and strategy games, Ertha offers players a complex and intricately designed playspace perfect for the creation of governments, economies, and shaky alliances between its player base.

Every player has the opportunity to leave a lasting impression within this ever-evolving metaverse.

You will need to act quickly if you want to own your own piece of Ertha. The land is being snapped up quickly, so head over to their globe to avoid missing out!

In Wizardia players collect NFTs in a truly magical play-to-earn role-playing game. Level up your character and upgrade your gear on your quest to become the ultimate Wizard.

The game’s gorgeous visual style ensures that it stands out from the other projects on this list, but don’t let that deceive you!

Wizardia tasks players with competing in intense PvP and PvE turn-based battles. You’ll need to think strategically as you fight for survival and uncover the magic behind this brand-new metaverse.

Players who wish to invest in Wizardia can do so through its dual-NFT ecosystem which ensures there are plenty of ways to engage with the play-to-earn mechanics.

Earn rewards and tokens for winning battles, renting out Wizard NFTs, and selling NFTs. Passive income can be generated through holding ‘Genesis’ NFTs.

Illuvium has already generated a lot of hype. This highly-anticipated RPG has been billed as the first triple-A Blockchain game and its mix of open-world gameplay and Pokemon-style capture mechanics give it huge mainstream appeal.

Players journey through an alien landscape on the hunt for creatures known as Illuvials. There are over 100 unique creatures to capture, each with unique classes and abilities. Build your dream team and think strategically to outsmart and outmaneuver your opponents in intense auto-battles.

Set in the distant future, Star Atlas is a massive multiplayer metaverse where players must side with one of three unique factions and compete for control of resources and territory.

In this vast sci-fi world, players embark on an epic journey where they will have the opportunity to influence the outcome of battles and earn real-life rewards for their contributions. It aims to achieve this by combining the blockchain with traditional game mechanics like combat, crafting, and guild wars.

Players are given further incentive to explore the world through the prospect of valuable in-game resources which can be converted into real-world value.

Moon is an extremely exciting proposition, and you can be one of the first to get involved. Inspired by traditional strategy games like Civilization and Age of Empires, this space-age play-to-earn metaverse promises in-depth economic, political, and social gameplay.

Players are tasked with building the first lunar colony by taking control of revenue-generating NFT land plots. Available from Moon’s brand new marketplace, each plot of lunar land grants access to a unique in-game economy in which players can start businesses, develop real estate, and create thriving communities. If developed and managed efficiently, lunar land has the potential to generate significant real-world income in the form of the game’s token.

However, such significant achievements in mankind’s history bring periods of extreme volatility. Don’t expect everyone to be on your side. There will be plenty of power-hungry players to contend with and conflict is never far away!

Moon Metaverse’s lunar land already looks like a fantastic investment for those looking to profit from the rise of play-to-earn gaming. Start your adventure among the stars by buying your own piece of the Moon today!

At this point, the rise of the metaverse is inevitable and the games pioneering this groundbreaking technology are set to become some of the most valuable entertainment properties in the world.

Whilst this is far from an exhaustive list of metaverse games, these are the five that we’ll be keeping an eye on, and we suggest you do too!

The Average Russian Citizen and the Global Economy