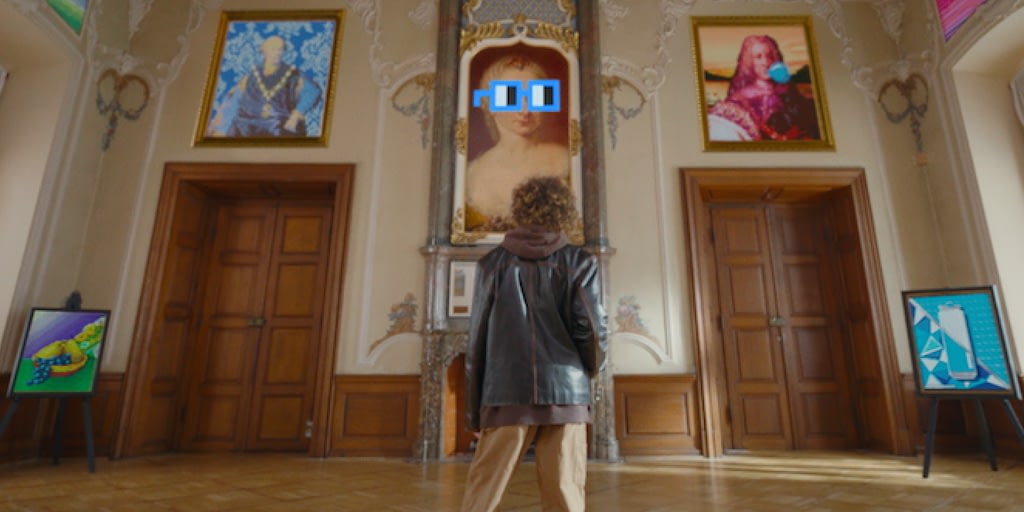 “Noun glasses” from the Nouns NFT project will show up in a Bud Light commercial that will run during Super Bowl LVI.
The beer brand was given a Nouns NFT as part of a partnership with the Nouns DAO, which passed a proposal via community vote to execute the agreement.

The commercial, titled “Zero in the Way of Possibility,” introduces the brand’s new Bud Light Next beverage. As part of a series of vignettes that shows various scenarios getting transformed, an art gallery contorts to show digital overlays on the artwork—including the boxy “Noun glasses” that appear on every Nouns NFT.

In January, Bud Light changed its Twitter profile picture to a Nouns NFT depicting a pixel art character with a beer mug for a head—and the familiar eyeglasses. The NFT was purchased by the Nouns Foundation for 127 ETH (about $394,000) and gifted to Bud Light following a proposal that Noun owners voted on and successfully passed in January.

“In exchange for one Noun from Nouns DAO, a prominent beverage company will include Noun glasses in a 2022 Super Bowl commercial,” read the proposal. “Once the Noun is received, this brand will also change their Twitter avatar to feature Noun glasses and intends to allow holders of the brand’s own NFT to collectively vote with their Noun on future governance proposals.”

While the proposal didn’t specifically mention Bud Light, the beer brand’s use of the NFT image suggested that inclusion in its Super Bowl commercial was likely. When asked last month about plans to use Nouns imagery in a Super Bowl ad, Avery Akkineni, President of Budweiser’s NFT strategy partner VaynerNFT, told Decrypt, “Anything’s possible.”

Bud Light’s announcement today confirms that Super Bowl LVI will feature at least one commercial with NFT imagery, although that not be the only NFT appearance during the NFL’s big game. Two of the halftime show performers—Snoop Dogg and Eminem—both own Bored Ape Yacht Club NFTs, which are rumored to be part of the show. Cryptocurrency exchanges FTX and Crypto.com are also both confirmed to run Super Bowl ads this year.

An NFT is a cryptographic token that serves as a blockchain-backed receipt for a unique digital item, and can represent things like digital illustrations, video files, and profile pictures. The market exploded in 2021, generating an estimated $25 billion in total trading volume and prompting brands like Budweiser to take note.

Budweiser made its first moves in the space last August, changing its Twitter profile picture to a Tom Sachs Rocket Factory NFT that it purchased along with a beer.eth Ethereum Name Service name. In November, the brand launched its own Budweiser-themed NFTs, which it billed as the “key to the Budverse” and future benefits.

Bud Light also launched its own NFT collectibles over the weekend, offering 12,722 total Ethereum NFTs for $399 apiece. Each comes with as-yet-unspecified exclusive benefits, including voting rights on future initiatives and merchandise. The Super Bowl commercial features imagery from that collection, alongside the Nouns glasses.

On Sunday, following the NFT drop, Bud Light tweeted a teaser video that showed Nouns glasses emerging from mist. “Dropping some alpha…if you own a Bud Light N3XT Collection NFT, you might enjoy our next move,” it read.

Interestingly, Bud Light wouldn’t need to initiate an official collaboration with the Nouns project to create such NFTs, or even own a Nouns NFT. That’s because Nouns is a Creative Commons 0 (CC0) project, which means the creators reserve no rights. In other words, it’s an open-source creation, built on the thesis that community-made derivative projects (such as Noadz and The Boneys) and merchandise will only increase the popularity and meme-ability of the original NFTs, thus increasing their value.

4156, the pseudonymous co-creator of Nouns, told Decrypt last month that the alliance with Bud Light came together without a formal partnership or signed contract—similar to the types of decision-making processes popular in decentralized autonomous organizations, or DAOs.

Nouns NFT holders are part of a DAO that votes on how to spend its sizable treasury—currently over $58 million worth of ETH—in an effort to build out an open-source intellectual property.

​​”These two organizations were able to get together based on a kind of trust that’s inherent in being early adopters in these communities,” 4156 said of the Bud Light alliance. “There was a remarkable absence of red tape. We were able to get it done, and to be very bold in what we’re attempting to execute together.”