Web3 is a ‘Mulligan’ For Us, Says Constellation Network Co-Founder 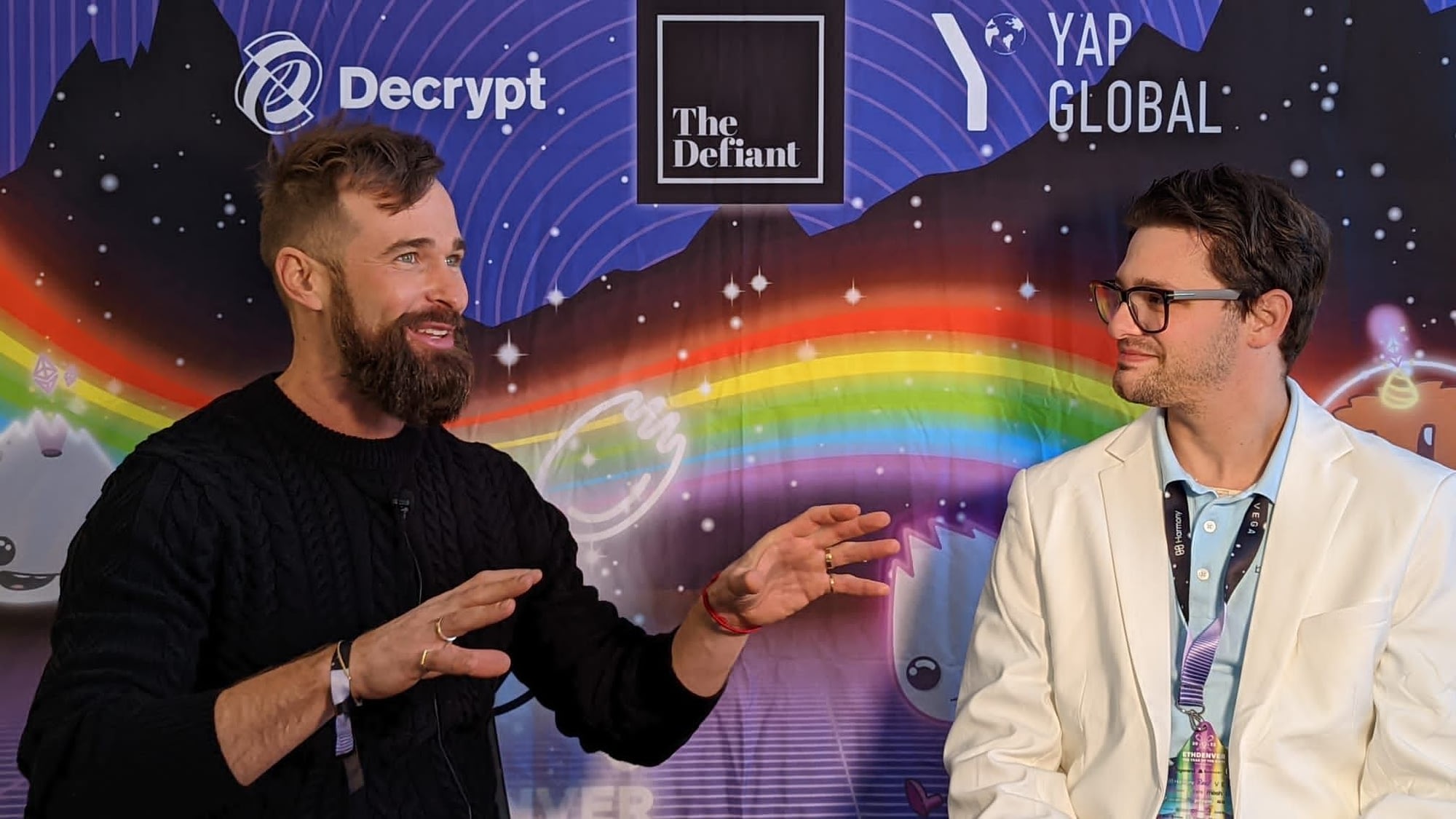 
Constellation Network co-founder and Chief Strategy Officer Benjamin Diggles sat down with Be[In]Crypto at ETHDenver, where he says that lawyers could be the unsung heroes of Web3 as we navigate through regulation and compliance.

Diggles, who also runs business development for Constellation Network and spends about 64% of his time with federal engagements, working primarily with the United States Transportation Command (USTRANSCOM), the largest data creator in the world and one of eleven unified combatant commands of the U.S. Department of Defense, in helping educate regulators wrap their head around governance and smart contracts.

Constellation Network is a Web3 blockchain ecosystem launched in 2017 that bridges crypto economies with traditional businesses.

On Friday, Diggles took the stage at ETHDenver, telling attendees that the federal government needs this technology. “Silicon Valley is frustrated because they’re developing all sorts of cool stuff, which the government wants – but make it too difficult to work with. From our perspective, why would we want to jump through all these hoops?”

Speaking to Constellation’s base layer protocol, the co-founder boasted the company’s status as the world’s first L_0 protocol, allowing for the platform to cross-chain pollinate between other blockchains with a zero transaction fee.

“We founded Constellation back in 2017 based on data that was the focus of our utility token, DAG, or directed acyclic graph,” he said. Rather than focusing on financial transactions, Constellation Network chose to instead, focus on data transactions and validating different data types – because at the end of the day, finance really is data.

“It all comes down to trust, and right now, nobody trusts each other,” Diggles told Be[In]Crypto. As Congress is starting to finally turn its attention to digital currency and blockchain technology, data and privacy are knocking at its doors waiting to be greeted.

“Due to this decentralized peer-to-peer (P2P) approach, it really brings forth the ability for multi-domain orchestration. In other words, how do you get different groups that may not really play well together, to orchestrate, because they don’t have to worry about IP security-men in the middle attacks,” he explained.

“As of the end of January, the White House published its Executive Order stating that all of this infrastructure will be moving to a zero-trust environment – because once you get data, you have to validate it, right? And that’s where centralized servers come into play, and right now, they’re just too slow for the amount of data we’re bringing online.”

Web3 is a second chance for the world

Looking ahead to Web3, Diggles says this really isn’t a “new internet” – but rather, when the individual becomes the internet.

“Web3 is not an evolution of Web2 – it’s a mulligan. We’re getting a second chance to rewrite the rules; to empower the individuals within these networks that have their interest in mind, versus them landing on Facebook’s webpage, signing a 130-page terms of service agreement, and being locked in their world. Those days are numbered.”

Regardless of age or demographics, those who grew up with this technology – “digital vampires” as Diggles describes, are either born a vampire into this age, or have the ability to be converted into one.

“We are either born vampires or have the ability to be converted,” he explains. “It’s largely because it’s not profound, but it’s easier to create something new than it is to go back and change something old – especially when the commercial sector is very nervous about public ledger’s putting their data out there, and not having the appropriate control.”

With regulators and lawmakers moving at a tortoise’s pace, Diggles says we are seeing a sort of “stutter step” where none of big tech is really setting the standard. “It’s why I love this young, youthful energy we are seeing right here at ETHDenver.”

Taking a closer look at the legal landscape, courts are fearful to proactively rule on cases involving these technologies, especially with the growing popularity and influx of NFT projects that attract copyright and trademark actions.

And why? No court wants to be the first in a new area of technology they don’t completely understand (nor care about).

“These legacies, as I mentioned earlier, are making it so difficult for new blood to come in, that it’s just not attractive. It’s easier for my buddies and I to create our own organization, law firm, or consortium than it is to go into some sort of institutionalized government group and be like, ‘hey guys, let’s get some new blood in here.’”

Looking back to the late 90’s, we are beginning to see older generations wipe their lenses and realize that perhaps, a new renaissance is here. Diggles emphasized his observation of older generations beginning to see Web3 as their chance to get in on something that they missed back in the late 90’s with the dotcom bubble and birth of the internet.

“I certainly didn’t take it seriously when Home Grocer initially raised $500 million, despite its ultimate end. Now, it’s time to change that. Blockchain isn’t technology and crypto isn’t finance, but rather it’s simply a shift in mindset. And that very mindset shift tends to be harder for older folks – and that’s not ageism. It’s just a matter of human nature.”

He continued to state that the company’s culture revolves around having daily, ongoing conversations with lawyers, often starting conversations off with a “we know it’s going to be a ‘no’ but we need to get this to a ‘yes’.”

“This isn’t about rinsing and repeating old law, or sticking to what you’re comfortable with,” he said. “Don’t get me wrong, you have to make sure you’re covering your ass on the basics, but you want to find lawyers that are willing to explore these areas and willing to take that step into the gray zone. But it’s what’s necessary.”

And to his point, lawyers have an ethical duty to competently and zealously represent their clients. What happens if you have a DAO or project that requires their lawyers push forward these arguments before the court?

“In understanding those risks, I think that lawyers are going to be the unsung heroes in this entire thing,” Diggles emphasized.

Ethereum use cases are missing in the classroom

Despite COVID-19 shutting down the world for nearly two years, classrooms are once again opening its doors to students as they resume their academic careers.

But given how much our world and economy has changed over the past two years, how should educational institutions be restructuring their curriculums as it relates to Web3, blockchain technology, and this “mulligan?”

Diggles, who is on the board of Blockchain School of Business as well as the co-chair for Portland State, actively helps the university write their curriculum – but confesses the oxymoron of its most fundamental infrastructure.

“These institutions are rather linear,” he says. “And this is an exponential kind of quantum thing happening right now, it becomes very difficult for a group to manage programmatically. So, while I think they’re doing a great job on teaching folks such as how to code a solidity contract – for Ethereum, the use cases are missing, because they just haven’t happened in the real world – yet.”

Looking to the stars and Constellation Network’s future

As for what’s to come, he hinted about the company’s future, with Constellation Network recently acquiring a retail analytics startup, Dôr, back in October 2021. The partnership yielded the first-of-its-kind traffic mining hardware product, called the Dôr Traffic Miner.

The breakthrough device allows owners to apply it to any doorway to calculate foot traffic using thermal imaging, feeding that data to larger analytics systems.

“We’ve been able to effectively put our network nodes on these sensors and as that data is being validated in real-time, individuals earn cryptocurrency as they walk in and out of doors. We’re bridging the real world and these crypto environments together to show people that there is value in their data, and they can get paid in crypto in real-time.”

At the end of the day, Diggles encourages anyone attending ETHDenver and those just entering into this space to remember what Constellation Network is doing on an infrastructure level.

“It’s tough when you talk about an ecosystem, since there are many entry points – but we really are providing the infrastructure that enables individuals and businesses to conduct and transact within Web3 and I know that’s a lot to say there. We want to enable them with the tools to be able to be successful – either as an individual or as an entrepreneur.”

Be[In]Crypto will be on-site providing you real-time coverage from ETHDenver, highlighting the innovations across Web3 and cybersecurity.

Here’s What the Future Holds