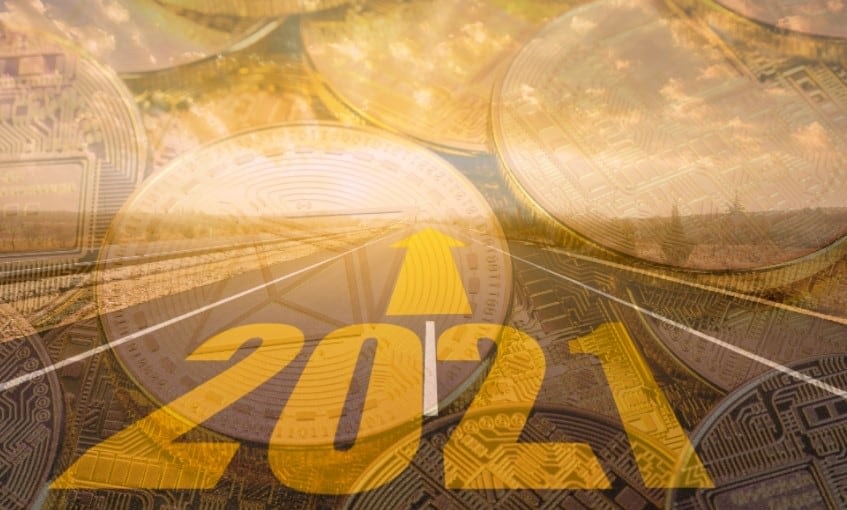 
Another year has passed, and so many things have happened in the cryptocurrency industry that it’s hard to grasp it all took place within 12 months.

With this article, we will take a look at some of the most influential altcoins throughout 2021. This doesn’t aim to summarize solely price performance, although it’s been considered, but the overall impact on the market, as well as potential future implications.

It’s also worth noting that it’s questionable if the market would have turned out the way it did if it wasn’t for Bitcoin’s stellar performance in terms of both price and adoption. While it might not have increased in value as much as some altcoins, it remains the driving factor within the cryptocurrency field and the stepping stone for the vast majority of institutions.

However, Bitcoin’s declining market dominance (read: its share relative to that of the entire market) has been on the decline in 2021. Data from CoinMarketCap shows that it declined from roughly 70% to about 40% in the span of 12 months, clearly indicating the huge demand for altcoins throughout the year.

With this said, let’s dive into the top 8 most influential altcoins in 2021.

It feels like a lot of what happened in 2021 was because of Ethereum. While the network has been clogged by the astronomical demand for decentralized applications (dApps), Ethereum continues to propel a movement that’s only catching more speed.

2021 was significant for the network for quite a few reasons. Back in August, the protocol implemented the so-called London hard fork. Among other things, the statewide upgrade integrated the Ethereum Improvement Proposal (EIP) 1559, changing ETH’s tokenomics massively.

The move was aimed to reduce the transaction fees, which had long proven to be an issue for the network. Instead of having to send gas fees to miners for the transactions to be included in a block, users now send gas fees to the network itself. This is referred to as basefee, whilst there’s also an optional tip that users can pay to miners. The basefee gets burned, and it’s set algorithmically – so it can vary from block to block depending on the network congestion. At the time of this writing, approximately five months after EIP 1559 was introduced, there’s over 56,900 ETH burned, currently worth about $215 million.

In essence, this shifted ETH’s tokenomics by reducing the rate of inflation since now there’s a deflationary mechanism in place. In fact, at one point, albeit for 24 hours, the burning rate was higher than the emission rate.

This, in conjunction with other factors such as overall bullish market conditions, DeFi booming, non-fungible token mania, and many more, are just some of the reasons for ETH’s strong performance against BTC, as seen in the chart below.

While many consider Dogecoin to be a joke, 2021 was the year when it managed to prove people otherwise.

At the time of this writing, DOGE is the 12th biggest cryptocurrency with a market capitalization of over $23 billion. It has been at the forefront of one of the hottest trends of the year – the memecoin mania – and is undoubtedly responsible for onboarding plenty of newcomers in the world of cryptocurrencies. Of course, an argument can be made that a lot of the investors who rode the hype train got burned, but it’s undeniable that, for a time, Dogecoin was what every TradFi and crypto investor was looking at.

It legitimized memes to an extent where multiple online and brick-and-mortar merchants accepted it for payments.

Heavily propelled by the world’s richest man, Elon Musk, DOGE was on every TV show across for quite some time. Musk even said that it’s better suited for being used as a currency than Bitcoin while also making clear that Tesla will accept it for some of its merchandise. Most recently, the Dogecoin Foundation joined forces with Vitalik Buterin to also build community staking.

All of this made Dogecoin one of the best performers of the year while also leaving a permanent mark on the industry.

It’s unreasonable to consider any 2021 altcoin list without including SHIB in it. We won’t go in-depth about SHIB’s developments during the year but instead, focus on the jaw-dropping price increase instead.

There are plenty of other cryptocurrencies in the top 100 that produced whopping and mind-numbing gains, but nothing comes close to this. Regardless of whatever people think of SHIB, the astronomic giga-chad gains alone justify it being on the current list.

Shiba Inu was the most popular cryptocurrency on CoinMarketCap in 2021 and was also at the forefront of one of the hottest trends of the year.

Solana achieved something special in 2021 in terms of both price performance and overall developments.

It established itself as a leading layer one protocol, albeit with its own issues to face, among a community of devoted and enthusiastic users. It saw an influx of developers shifting from Ethereum towards it in search of a scalability solution while users flooded the network seeking quicker transactions and lower fees.

Data from DeFi Lama shows that the total value locked in Solana is currently about $11.5 billion, which is a tremendous increase. For comparison – in March this year, it was less than $150 million.

BNB was at the forefront of the Binance Smart Chain mania that we observed earlier in the year. As users were seeking for Ethereum alternatives and were desperately demanding more affordable, quicker, and scalable DeFi primitives, BSC emerged as a go-to response.

In February this year, the unique addresses of the network tripled in less than a week. This growth accelerated further, and suddenly everyone was obsessed by finding the next big thing on the Binance Smart Chain.

And since BNB is to BSC what ETH is to Ethereum, its value skyrocketed. BNB has spent a lot of the time in 2021 being the third-largest cryptocurrency by means of total market capitalization and has charted an impressive YTD increase of about 1268%.

Avalanche is another layer one protocol that really took off in 2021. The increase in AVAX’s price seems to be directly correlated with the growth of its ecosystem.

Most recently, Circle announced that its USDC stablecoin (which is amongst the largest stablecoins by means of market cap) went live on Avalahcne in a bid to empower its native DeFi ecosystem. It seems that the narrative is pretty similar to what drove Solana and the Binance Smart Chain to prominence.

By now, the metagame of layer ones seems quite obvious in hindsight, and it’s pretty much the exact same protocols native to these layers that tend to perform extremely well as well.

Avalanche attracted tremendous value locked in various protocols running in its ecosystem and tapped massive partnerships throughout the entire year. Aave got deployed on it, OpenOcean also integrated on the network, and so forth.

Axie Infinity’s AXS token is one of those strong performers that baffled everyone in 2021. While it failed to bring the same gains as SHIB, it’s one of the contenders, for sure. The cryptocurrency is up by slightly less than 18,000% in 2021, but that’s not what’s most impressive.

AXS established itself as the first play-to-earn game and paved the way for a trend that would, later on, become one of the hottest in the industry.

Axie Infinity is a game where users can purchase characters called Axies, breed them, train them, increase their capabilities, and, ultimately, take on the world of adventure or play versus other players. By doing so and competing in various in-game tasks, they earn cryptocurrency, further propelling the P2E model.

LUNA is the cryptocurrency of the Terra ecosystem, and it’s one that’s been absolutely raging as of lately.

As of the time of this writing, the total value locked in Terra is almost $19 billion. For comparison – it was around $3 million last December. Interestingly enough, it has become the second-largest network by this metric after Ethereum, surpassing the likes of BSC, Avalanche, and Solana.

A big part of Luna’s growth has also been the overall adoption of the Terra USD – a decentralized algorithmic stablecoin based on Terra’s blockchain. It’s currently bolstering a market cap of $10 billion, making it the biggest algorithm stablecoin on the market as well as the third-biggest stablecoin after USDT and USDC.

All of this propelled LUNA’s price as well, as the cryptocurrency is up 13,300% in the past 12 months.