This Week on Crypto Twitter: Michael Saylor Leaves CEO Role to ‘Focus More on Bitcoin,’ Nomad and Solana Get Hacked 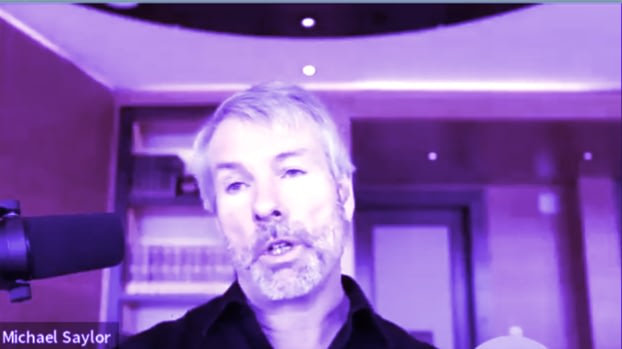 
After two consecutive weeks of growth, crypto markets cramped up a bit. Even as reports of liquidity troubles appear to have slowed, investors were cautious.

This week, Bitcoin-HODLing corporations Block Inc. and MicroStrategy both reported significant impairment charges on their holdings. Block is down $36 million, while MicroStrategy is down a staggering $917 million. There also were massive attacks on Solana and the token bridge project Nomad.

1/ Nomad just got drained for over $150M in one of the most chaotic hacks that Web3 has ever seen. How exactly did this happen, and what was the root cause? Allow me to take you behind the scenes 👇 pic.twitter.com/Y7Q3fZ7ezm

The exploit ostensibly was easy to pull off for anyone with the know-how, resulting in a bit of a free-for-all as attackers piled in to loot the protocol. Nomad promptly offered a reward for anyone who returned the funds, and, as of Friday, had recovered $22 million.

Barely 24 hours after the Nomad exploit, reports started flooding in of a major Solana hack that may have drained up to $8 million.

– attacker is stealing both native tokens (SOL) and SPL tokens (USDC)- affecting wallets that have been inactive for >6 months- both Phantom & Slope wallets reportedly drained pic.twitter.com/AkZXOGLD0Q

Here’s what you can do right now to best protect yourself 1. Go to >Settings on your @phantom wallet2. >Trusted Apps3. >Revoke Permissions for any suspicious links

There is an active security incident on Solana. Many (7000+ and counting) wallets are drained of SOL & USDC. Don’t know root cause yet. Maybe permissions granted to apps. For remediation, send the funds to a cold wallet or CEX like @Binance. https://t.co/nQrBXAgCbf

Justin Barlow, an investor at Solana VC firm Solana Ventures, was one of the casualties.

For reference I haven’t interacted with any contracts at all in ~40 days. My ERC-20 and SPL USDC held on both @slope_finance and @TrustWallet were drained

A few hours into the hack, Solana reported that almost 7,800 wallets had been victimized.

Engineers are currently working with multiple security researchers and ecosystem teams to identify the root cause of the exploit, which is unknown at this time.

The team then posted a partial explanation, alleging that the exploit likely was due to stolen private key information. Solana also said affected users appeared to have been compromised through their Slope wallets.

This exploit was isolated to one wallet on Solana, and hardware wallets used by Slope remain secure.

While the details of exactly how this occurred are still under investigation, but private key information was inadvertently transmitted to an application monitoring service. 2/3

Ava Labs CEO and Founder Emin Gün Sirer shared his thoughts, including some highly technical explanations about how the private keys were accessed.

There’s an ongoing attack targeting the Solana ecosystem right now. 7000+ wallets affected, and rising at 20/min. Because it’s very early and the attack is ongoing, there’s a lot of misinformation and speculation. So here are a few thoughts and clarifications.

See below for our official statement on the breach situation (now posted to our Medium).

We empathize with everyone affected, and are doing our best to solve and rectify the situation.https://t.co/E9xrKbdLOy

Twitter user and blockchain developer @fubuloubu pointed out one of the downsides of IP.

Hundreds of millions lost due to unnecessary IP protection

On Monday, the U.K. High Court ruled that Dr. Craig Wright, a man who claims to have invented Bitcoin, put forward false evidence as part of his latest defamation court battle against crypto podcaster Peter McCormack, who has repeatedly called Wright a liar. So McCormack was asked to pay him 1 pound ($1.21) in damages. Who says you can’t see a person grinning behind their tweet?

As some of you will now have seen, the judgement in my trial v Dr. Craig Wright has now been handed down.

I want to thank my lawyers for their diligent work on the case.

I also want to thank Mr Justice Chamberlain for this result. We are very pleased with his findings.

In other news, eagle-eyed crypto reporter Jacqueline Melinek wants to know why Gucci will be accepting APE.

Crypto fan Hsaka (@HsakaTrades) on Thursday pointed out how even extremely successful investors like Cathie Wood make mistakes. Pretty big ones, too: Looks like she sold the dip on Coinbase shares. Big time.

And no matter how you feel about crypto, there’s something odd about a Virginia pension fund investing in “yield farming” … now. Is it not a little too soon after Terra and Celsius collapsed? Twitter finance analyst Sean Tuffy smells something fishy.

Arguably the week’s biggest story, MicroStrategy announced that Bitcoin-loving CEO Michael Saylor would be stepping down after 33 years on the job, moving into a new role as executive chairman. Phong Le, the company’s president, is set to fill Saylor’s shoes on Monday. Saylor is set to focus even more on Bitcoin.

A popular blockchain sleuth believes that powerful forces are plotting to FUD Binance.

They called it “play-to-earn” and invested $311M into its parent company.

How Web3 VCs stumbled into funding a Ponzi. 🧵

The CEO of the studio behind Axie moving millions of dollars in tokens before disclosing a massive hack probably didn’t help matters.

DON’T DO THIS!! The WORST Crypto Advice to AVOID!!

There’s Still Time to Sign Up for Crypto’s First…