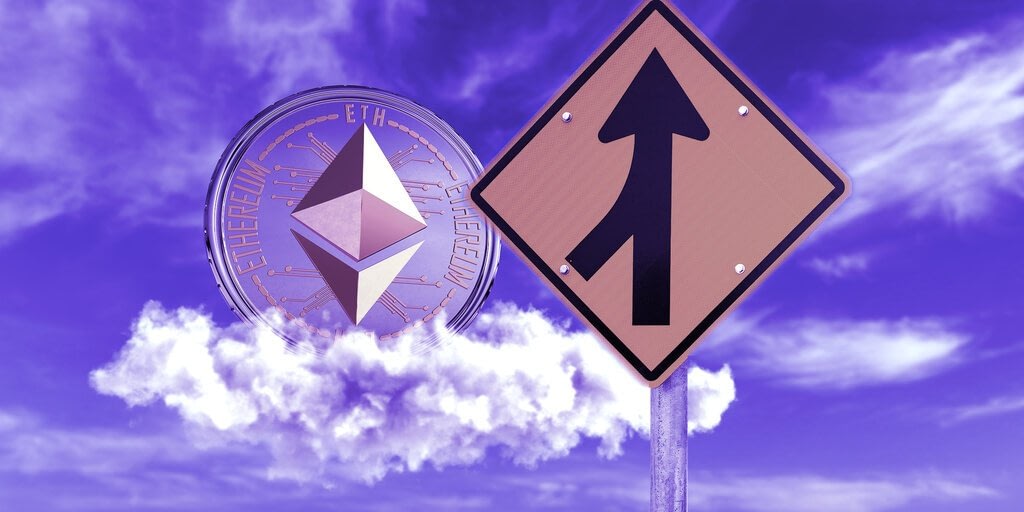 
It was merge week. Ethereum’s long-awaited overhaul was finalized without a hitch, but there was no sudden influx of capital, either. Ethereum’s price actually fell 8% to below $1,500 on Thursday, the day of the merge. At the time of writing it trades for $1,376, about 22% cheaper than it was last Sunday.

A day before the merge, Ethereum’s co-founder Vitalik Buterin shared a graph from etherchain.org showing the network’s hash rate has maintained consistency, despite negative predictions from certain forecasters.

Looks like the “hashrate will drop weeks before the merge due to miners rushing to sell ahead of everyone else” thesis has been proven completely false.

I’m a bit surprised! I argued against a 50% drop but definitely expected like 5-10%. pic.twitter.com/l9OpT8fPFl

The following day, Thursday, Buterin broke the news that the network’s transition to proof-of-stake (PoS) was complete:

Happy merge all. This is a big moment for the Ethereum ecosystem. Everyone who helped make the merge happen should feel very proud today.

Beeple, the digital artist whose NFT collection “EVERYDAYS: THE FIRST 5000 DAYS” sold for an unprecedented $69.3 million through a Christie’s auction, ushered in the new era with a purple vision of Ethereum mining in the future:

Former Ethereum co-founder Charles Hoskinson, who now heads competitor Cardano—which has a market cap of $16.4 billion—was feeling salty. He posted a meme likening the merge to a nightmare. When someone tweeted him asking where Cardano’s technology stands in relation to Ethereum, Hoskinson let rip with some flagrant self-promotion:

About three years ahead on research, two on engineering. They will one day figure out that slashing is a really really bad idea

Crypto market intelligence firm Santiment sounded a note of caution over how centralized Ethereum staking had become after the merge.

This was a common complaint. According to Martin Köppelmann, co-founder of DeFi platform Gnosis, popular crypto exchage Coinbase and liquidity staking pool Lido Finance together account for 42% of post-merge Ethereum validators, and the top seven entities control more than two thirds of the stake validating transactions. Köppelmann also ran a poll in which three quarters of 15,885 respondents agreed that Coinbase and Lido’s staking dominance “needs to change.”

Huge inflow to exchanges coming from:

That’s $1.2B in two transactions 👀 pic.twitter.com/UMOAh0mXmK

Feeling some déjà vu, help me out: today folks are celebrating an ‘introduction’ of PoS, a consensus system known for 20 years we’ve long had examples of, which has numerous flaws cypherpunks carefully avoided in developing PoW. Why is this being advertised as new or innovative? pic.twitter.com/Ir0EJCQfnX

It was also a big week for MicroStrategy’s former CEO and current executive chairman Michael Saylor. It wasn’t so much what he said, but what people were saying about him. On Tuesday, Bitcoin enthusiast Udi Wertheimer trolled his 114.3k followers with believable fake news.

BREAKING: MICROSTRATEGY HAS PURCHASED AN ADDITIONAL 1,143 BTC AT AN AVERAGE PRICE OF $22,958 USD

Fake or not, it would be wrong to say that Saylor isn’t considering swelling Microstrategy’s 129,699 Bitcoin war chest (worth $2.6 billion at today’s price). Last week, an SEC filing revealed that MicroStrategy has entered an agreement with investment bank Cowen & Co. to sell up to $500 million in shares of its Class A common stock. It may use the proceeds to buy more Bitcoin.

On Friday, the White House released new guidance on crypto. Billed as a “First-Ever Comprehensive Framework for Responsible Development of Digital Assets,” the new guidance uses the recommendations and conclusions of various government agencies after six months of studying the crypto industry.

Saylor shared a lengthy article by crypto investor Nic Carter denouncing the crypto mining climate study done by the White House Office of Science and Technology Policy (OSTP). Carter claims the main weaknesses of the study were unreliable sources, a lack of perspectives from industry experts, and no novel data.

The latest White House Crypto Climate & Energy Report is full of misinformation generated and promulgated by unscrupulous crypto promoters in order to undermine #Bitcoin and champion their own interests. @nic__carter expertly debunks the propaganda.https://t.co/kW7sictekQ

Saylor is not a good flag bearer for this industry

He is an absolute embarrassment

Finally, Terra CEO Do Kwon broke his silence on Saturday after headlines emerged earlier in the week saying that a South Korean court had issued an arrest warrant for him for violating capital market rules. The Korean Ministry of Finance also announced that it was seeking to void his passport. He told followers he’s not on the lam.

We are in the process of defending ourselves in multiple jurisdictions – we have held ourselves to an extremely high bar of integrity, and look forward to clarifying the truth over the next few months

NYDIG, Under New Management, Bets Another $720M on Bitcoin

Multiple Blockchains Will Succeed, ‘But Not 20 or 30’: Fantom Foundation CEO