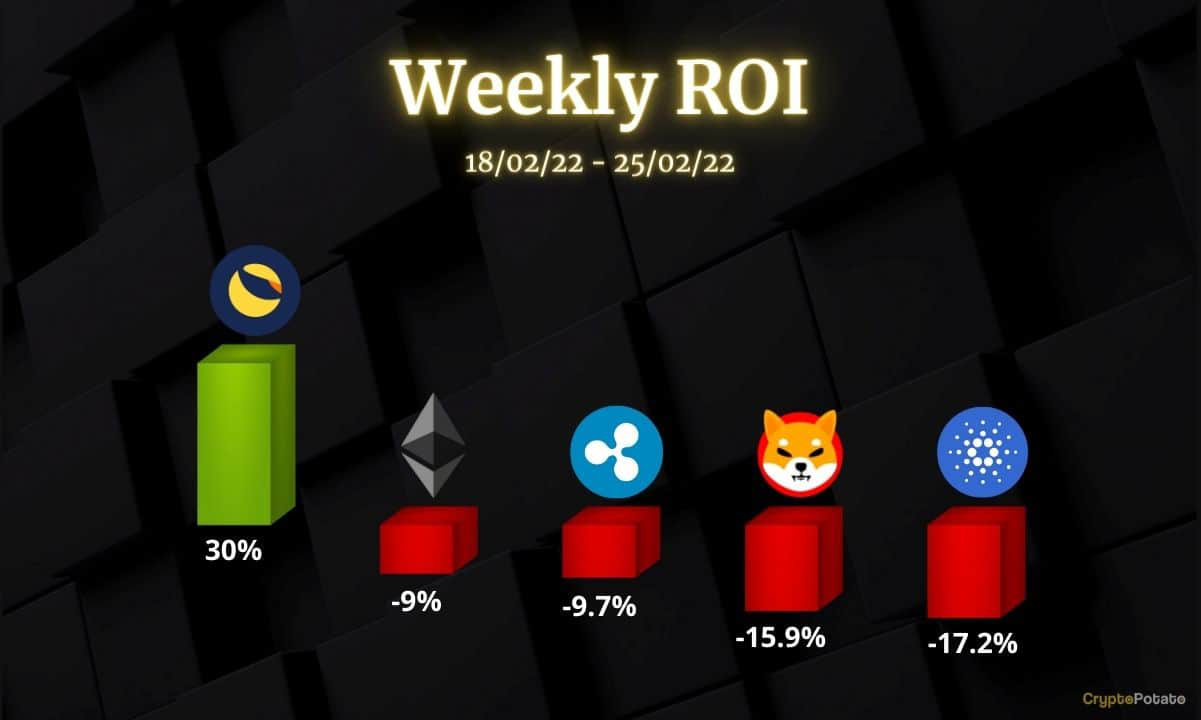 
This week, we take a closer look at Ethereum, Ripple, Cardano, Luna, and Shiba Inu.

ETH had a mind-blowing price action in the past few days. It crashed over 15% on the news of the Russian invasion, only to recover most of that loss later on in Thursday. Nevertheless, the cryptocurrency is still found in a downtrend, and the price lost 9% of its dollar value in the past seven days.

The overall macro picture remains very much bearish, and this would only begin to change if ETH reclaims the $3,000 level, which appears unlikely at the time of this post. The support at $2,500 has held well on Thursday, but it may be retested soon.

The indicators on the daily timeframe remain bearish, and ETH appears to be at a decisive moment after this most recent relief rally. Price may jump and test the key resistance at $2,800 or fall again to the abovementioned support.

Despite the nice recovery on Thursday after markets panicked due to the Russian invasion, XRP’s price continues to move lower today. The daily candle is in red and is expanding. This downtrend has been ongoing for the past week, and XRP lost 9.7% of its valuation in the past seven days.

The resistance at $0.70 did not allow the price to move higher and continues to hold well. The key support is found quite a distance away at $0.58, and XRP may end up testing this level before any sustained recovery can happen.

Looking ahead, the indicators are bearish, and momentum is on the seller’s side. Therefore, it’s more likely to see prices fall lower in the near future until it finds a good level of support. Uncertainty in the markets remains high hence volatility will be the norm.

Cardano’s price is found at a critical support level after a sharp drop on Thursday below $0.80. If ADA manages to hold above this level, then the price has a good chance to test the key resistance at $1. If it fails to do so, then ADA might fall to the next support found at $0.68. Overall, the cryptocurrency had a tough week with a 17% loss in price in the past seven days.

The current price action and indicators do not favor bulls, and ADA may continue to fall before any sustained recovery. The RSI on the daily timeframe nearly fell into the oversold area yesterday, but then quickly recovered. The selling volume has been strong, and this could continue.

The next few days are critical for ADA, as losing another key support level will push it to a much lower valuation that is quickly approaching half a dollar.

In an impressive move yesterday and today, Luna has managed to make a higher high and break the key resistance at $64. The price is now just above this key level, and the question is if bulls have sufficient momentum to take it to the next resistance at $79. Overall, it was a fantastic week for Luna, closing with a 30% price increase in the past seven days.

Luna’s strong fundamentals continue to make it one of the best performers on the market, and the most recent bearish volatility was short-lived. Volume and the indicators suggest a strong bullish bias, with MACD and RSI making higher highs as well.

Looking ahead, Luna might have a good chance to reach the next key resistance level at just under $80. Such a move would go against most of the market and would put Luna in a very small group of cryptocurrencies that managed to sustain a rally while world markets are in turmoil.

Shiba Inu’s magic seems to have disappeared this past week, with the price losing 16% of its valuation. Now, the cryptocurrency is found on the key support at $0.000023. If buyers do not come in strong here, then its fate is looking grim in the coming week.

Out of the past ten, nine daily candles closed in the red. This shows that SHIB is found in a very strong correction after the rally in early February. The price is quickly coming back to its breakout level and would erase all the gains made since then.

All eyes are now on the critical support. A break below this level would push SHIB towards $0.000018. This would be a level not seen since the January 22nd crash. Considering current world events, it is hard to be hopeful.

Dogecoin Co-Creator Bashes Other Memecoins, Compares them to Ponzi Schemes

Altcoins Surge | Here's What You Need To Know