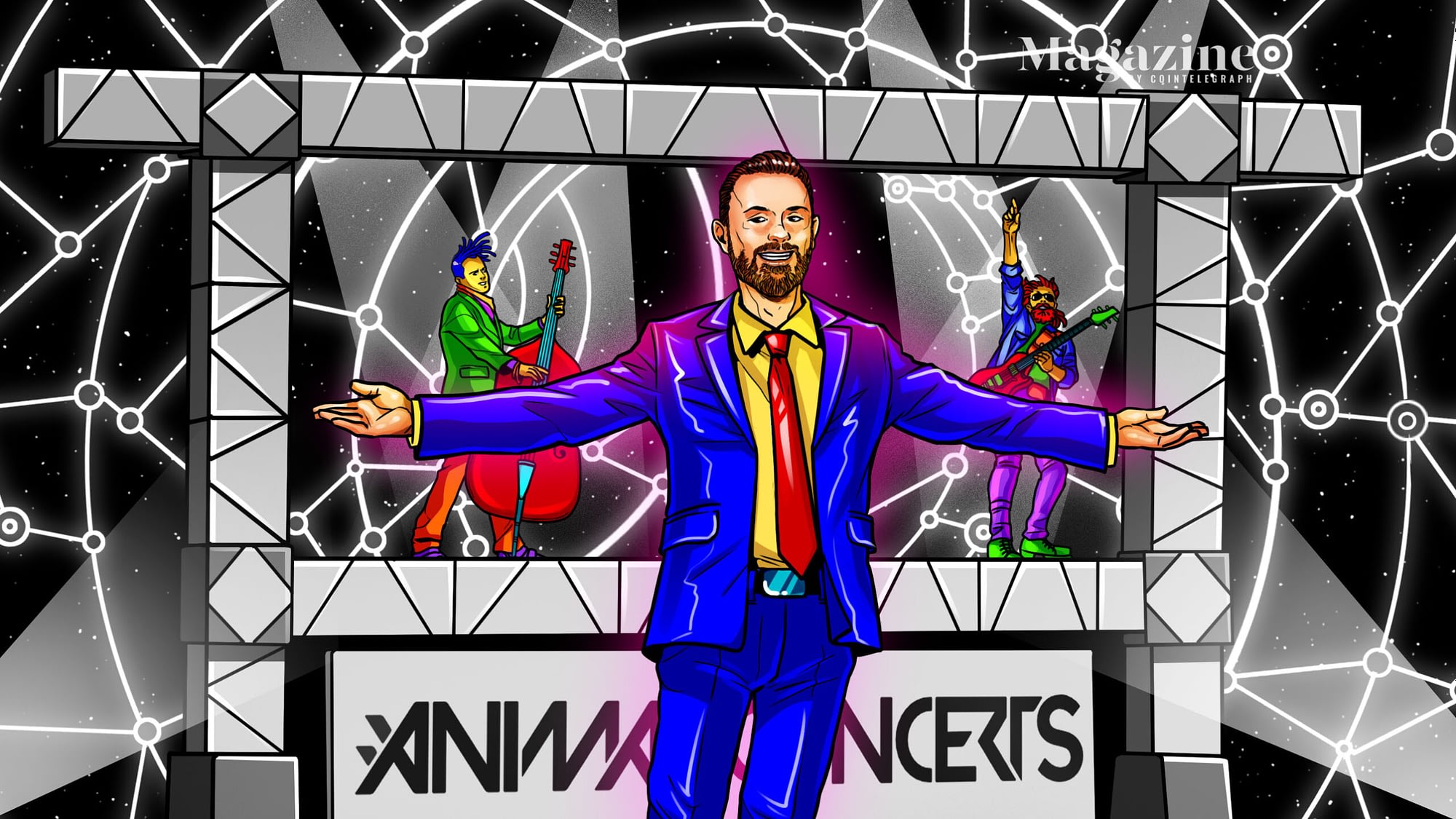 
Colin Fitzpatrick is a Dubliner based in Dubai who turned a bad time during quarantine into a business that promises to bring your favorite artists to a metaverse near you. His company Animal Concerts, which launches in January, is in the process of signing world-class artists to perform in the decentralized worlds of the Metaverse.

Among the first to get the Animal Concerts treatment was Grammy-winning rapper Future, who performed at an in-person Animal Concerts-themed Halloween party in Miami, which was filmed in such a way that it can later be broadcast in the Metaverse. In this startling new land, there are no COVID restrictions nor travel bans, and artists can sell NFT memorabilia to fans with little overhead, investment or middlemen.

Virtual concerts have already begun to appear, most notably Ariana Grande’s October 2021 performance in Fortnite. Around 78 million Fortnite users attended Grande’s show, with some commentators speculating that she was set to earn over $20 million from the virtual gig.

Travis Scott pulled in $20 million for a Fortnite performance in 2020, and Ed Sheeran similarly took to the virtual stage of Pokemon Go in November 2021. When Swedish star Zara Larsson held a concert on Roblox, she earned seven figures for sales of “in-game items like hats, backpacks and sunglasses” which started at just $1.

Fitzpatrick says that he is in the last stages of signing a concert with a top-100 Grammy-winning artist who I agree not to name. In preparing for the concert, she would “go into a green screen studio where she does our performance, and we record it and then we can essentially turn her into an avatar where she is properly in one of the decentralized blockchain-run worlds,” he explains, regarding the process of concert digitalization.

Holding concerts in the Metaverse comes with a slew of advantages for artists, according to Fitzpatrick. Whereas streaming services like Spotify are reducing music revenues, Animal Concerts allows performers to earn 50% of the revenue from both ticket and NFT sales. With celebrities benefiting directly, they have a big incentive to entice their fans into the Metaverse, where many of them will encounter blockchain for the first time.

A former DJ who has been passionate about music from a young age, Fitzpatrick points to a cupboard behind him where he keeps a box with “ticket stubs and flyers from gigs that I went to when I was in my youth.” For him, they are priceless mementos of his formative experiences.

Just as the idea of a Metaverse powered by virtual reality (VR) was gaining steam along with the explosion of NFTs earlier this year, Fitzpatrick realized the two could be combined to offer solutions to a struggling music industry, which he says has seen declining revenues with countless concert tours canceled since the beginning of the pandemic.

The platform will soon allow people at home to stream VR-augmented concerts live and experience them as an interactive event rather than as one-sided TV broadcasts. NFTs can be given out as Metaverse-age equivalents of the ticket stubs in Fitzpatrick’s memory box.

“With 360-degree cameras on stage, you can use a VR headset to get an immersive experience — like you are dancing on stage with your favorite bands, from your living room anywhere in the world. We want to enable you to enjoy the concert with friends by seeing their avatars,” he explains. The goal is to become the “Netflix of live streaming concerts.”

Fitzpatrick explains that virtual concerts are desirable from the artist’s perspective because they do not require travel and the number of viewers is not limited by venue size. There is naturally also an economic driver, as virtual venues do not demand the same amount of stagehands, security or other costly infrastructure, and also because the number of middlemen is reduced.

With the view that different scheduled events are happening in various virtual worlds, the idea of the Metaverse as a reality consisting of numerous intertwined virtual worlds is becoming increasingly current.

Animal Concerts is honored to be working with 15-time GRAMMY Award winner @aliciakeys as she plays at her One Night Only event celebrating the launch of her new double album “KEYS”.#KEYS #KEYSUnlocked #KeysOriginal pic.twitter.com/YhzDPiPXiJ

What these metaverses have in common, whether games like Roblox or blockchain worlds like Decentraland, is that “they have a huge user base and they’re going to be selling digital assets in one way or another,” Fitzpatrick says. While most centralized worlds will require a user account, decentralized worlds allow access via wallet software, such as MetaMask. The major difference between centralized and decentralized worlds is their interoperability — items purchased in Pokemon Go cannot be transferred to Roblox, whereas NFTs can be displayed in a large number of different decentralized virtual worlds.

“Today’s kids are used to purchasing skins — digital assets in games. It’s a very simple step for them to look to purchase NFTs released by their favorite musicians,” Fitzpatrick says.

The need for a wallet can be a barrier for those who are new to crypto, Fitzpatrick admits. Similar to Beeple, who wanted to make sure his NFTs can be purchased by credit card, Fitzpatrick sees a future where virtual concert-goers have the option to “go to a website, putting in the credit card details and purchasing tickets and then purchase an NFT without worrying about a cryptocurrency.”

Fitzpatrick, 41, began on his path in 1999 when he began studying business management at Portobello Institute in his native Ireland. He immediately began doing freelance web design work, soon expanding to DJing and working as a nightclub organizer.  “I used to organize club nights and do festivals,” he recounts of his younger days.

He chose the corporate path upon graduation, joining Dell as a relationship manager in 2002, and in 2006 took an enterprise sales job with Oracle where he spent five years until 2011. After about two years with Salesforce and HubSpot, Fitzpatrick returned to Oracle for seven years, which saw him rise through the ranks from a sales strategy manager to a leadership position in the “Multi-Cloud Ecosystem” unit, with the latter promotion taking him from Dublin to Dubai “to build new business here for them” in late 2018.

Fitzpatrick discovered Bitcoin at around $100 in 2013, but he was “sadly persuaded out of it by a friend,” he recalls. He got back in the game in late 2016, however, becoming “a full convert” when the concept of blockchain clicked for him. Soon enough, he started chatting with another employee at Oracle who was interested in crypto, and “then we found someone else,” and it started to “spread like wildfire,” he recounts with a laugh.

“Fast forward a couple of months — halfway through 2017, there was more cryptocurrency trading being done in the office than there was selling Oracle software!”

Spending much of his time researching cryptocurrencies, he “wanted to go work for a blockchain company, but there was nothing in Dublin,” and “virtual jobs” were not as common as they are post-COVID, he explains.

COVID wreaked havoc on Oracle. The company, despite having recently moved Fitzpatrick, an employee of 13 years, to a new country, “made me redundant smack bang in the middle of COVID, which absolutely sucked — it was just when the lockdown started,” he recalls with a hint of shade. “I was in big trouble” as almost no companies were hiring at the time, but Fitzpatrick managed to find work as a director of business development with Eastnets, “a local company who do payments and software compliance.”

A year in, however, he quit. It was time to strike his own path as an entrepreneur.

Fitzpatrick says that the average Animal Concert will cost between $10 and $30 to attend, with tickets available on sites like Ticketmaster as if for any event taking place in the “meatspace,” as some Metaverse proponents humorously like to call the physical world. Those purchasing tickets with Animal’s native token will receive discounts, “so if you want to buy with our token, it will be cheaper, so that’s an incentive to use our native token,” he adds.

There’s always a token, of course, and the Animal token will also function as a governance token, allowing fans and artists to engage in interesting new ways, such as by “voting on which songs artists will play or what outfit they will wear.” Fitzpatrick believes that a highly engaged fan base is “sticky,” and will attend numerous concerts while purchasing artists’ NFTs. Those staking the token will be eligible for “first access to the hottest NFT drops, or you get free tickets to future concerts,” he adds.

This model can be compared to the fan token phenomenon, of which Socios is the market leader. Socios has a tradeable native token which comes with various utility functions, and the fan tokens created by the firm for different sports teams gather more chatter from fans who seem to view them as akin to investments in their favorite teams. Such tokens can also provide sports clubs with massive liquidity, as they can slowly release them as fans open their wallets.

Could Animal become the Socios of music?

“We have a plan to create a token for each artist,” Fitzpatrick responds, explaining that each artist has a group of very loyal fans who would be sure to be interested in holding tokens based on their idol. Looking through the lens of NFTs, which are non-fungible tokens that cannot be subdivided, a fungible token can be imagined as a single, fractionalized NFT which represents the name, idea, or concept it pertains to.

As such, “Ariana Grande Token” could quite possibly be expected to rise in value in relation to her star power, and investing in the coin of an emerging artist could prove fruitful. Just as with Socios-created sports tokens, music fan tokens could, in the future, function as a sort of quasi-share of the artist.

Star power is sure to have a big impact on any future tokens, as Fitzpatrick agrees that fans “won’t necessarily care about the Animal Token, but they would care about the Ariana Grande Token.”

Can Bitcoin survive a Carrington Event knocking out the grid? – Cointelegraph…