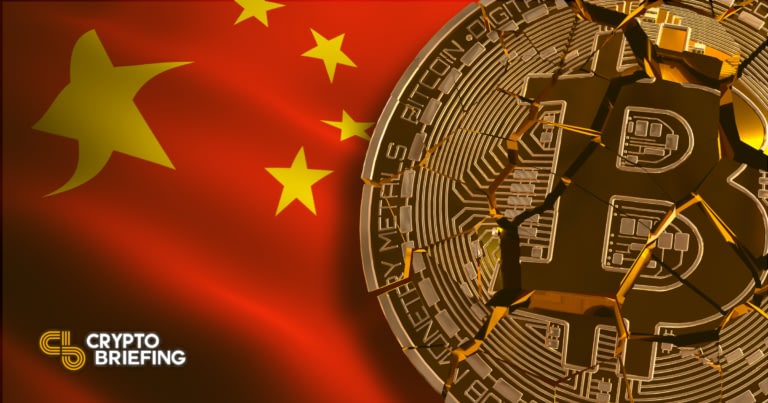 China’s central bank has issued guidelines for a harder crackdown on crypto.
Bitcoin and crypto prices crashed this morning after the news broke-out, with experts warning this crackdown is more serious than previous ones.
The implementation of further bans in China threatens a huge setback for crypto markets.

The central bank of China called a meeting Monday with the country’s banks to crack down harder on cryptocurrencies, Reuters reported.

Central Bank in China Calls for Ban on Crypto Trading

Chinese regulatory fear has gripped the market this morning.

First, the Agricultural Bank of China published a letter on its website early Monday, ordering the prohibition of crypto-related services. Crypto Briefing confirmed from two independent sources that the post was taken down in minutes. However, the contents of the post left crypto investors terrified.

Quick explainer for those confused re AGbank

15 mins later it appears they deleted the notice

2021 getting rugged by the third largest bank in the world pic.twitter.com/qXax70lqgA

In the letter, the third-largest bank in China released a formal “Statement of Virtual Currency Transactions,” making clear its intentions to prohibit service to account holders and service providers involved in Bitcoin transactions.

Hours after the deleted letter was shared on social media, the country’s central bank has confirmed the fears of a stricter regulatory crackdown.

The People’s Bank of China is looking to discontinue services to account holders and entities involved in crypto trading. The central bank reportedly called upon financial institutions to cut payment channels for crypto trading and related services.

A Bigger Chinese Threat Than Ever

While reiterating a crypto ban in China may sound redundant to investors who have around for some time, experts have raised a serious cautionary flag this time.

The recent crackdown began in May after the Financial Committee of the State Council vowed to curb wasteful mining and irresponsible trading practices in the country.

Since then, local governments have enacted a ban in all major mining provinces. Today’s banking scare from the country’s central bank has intensified the fears of trading prohibitions, threatening a major decline in crypto trading volumes.

Dovey Wan, a Chinese crypto investor and the founder of Primitive crypto, tweeted that, “now it’s about the time for the worst (at least for mainland) to come.”  She noted that the crackdown could expand to OTC desks and exchanges.

Wan added that the recent meetings were  “about collecting data/information and observing market and industry feedback,” and the government could take further steps soon.

The Chinese government banned crypto exchanges in 2017. However, crypto investors in China got around this ban by using OTC desks and foreign exchanges for trading. Many Chinese exchanges like Huobi, OKEx, and Binance also relocated and continued to serve Chinese users from overseas.

Bitcoin was trading 7.5% lower today since the first report from the Agricultural Bank of China came out. Ethereum dropped below $2000, losing 11.5% on a daily scale.

Meanwhile, China continues to expand its central bank digital currency program, long considered a threat to the free use of decentralized cryptocurrencies in China.

Speaking to Crypto Briefing, Cryptohopper CEO Rudd Feltkamp said “China is rolling its own cryptocurrency and has every incentive to have as little competition as possible,” adding that “People still react strongly to actions from China that create uncertainty, so this is likely to reflect negatively on the Bitcoin price.”

How Do I POWER My Mining Rigs?

Is Solana (SOL/USD) consolidation a wait for takeoff or a further slide?