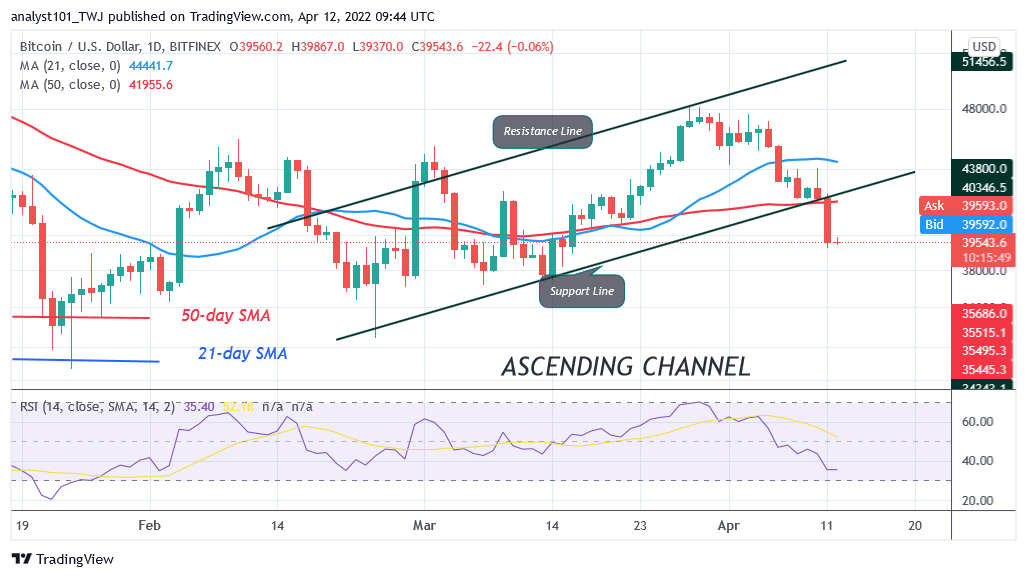 Following its rejection at the $48,000 overhead resistance, the market has declined to the low of $39,551 at the time of writing. As the largest cryptocurrency loses the $40,000 psychological price level, BTC price is prone to further decline. After the initial selling pressure, the BTC price fell above the $42,000 support on April 8. The crypto consolidated above the $42,000 support for three days before the recent breakdown.

On April 11, the bears break below the $42,000 support or the 50 – day line SMA leading to further decline. There are indications that the current decline will extend to the low of $37,577. The $37,000 support will be well contested by buyers. The price level has been a crucial support for the bulls who are ready to defend it. On March 13, the bulls defended the $37,000 support as the crypto rallied to the $48,000 high. Bitcoin will regain bullish momentum if price falls to $37,577 low and holds.

Samson Mow is the former chief strategy officer of Blockstream. He spoke at the Bitcoin 2022 conference in Miami that three new jurisdictions would be adopting or proposing to adopt Bitcoin (BTC) as legal tender. According to Mow, Bitcoin is a legal tender in the Caribbean island of Roatán which is part of Honduras. Besides, Honduras Prospera Inc. is the organizer and promoter of the jurisdiction. Joel Bomgar is the entity’s president who said: “Bitcoin within Prospera operates as legal tender. That means no capital gains tax on BTC, you can transact freely using BTC, and you can pay taxes and fees to the jurisdiction in BTC.”

The second jurisdiction is to make Bitcoin a legal tender in Madeira. Madeira is an autonomous region of Portugal. Miguel Albuquerque is the regional government president of Madeira. He said: “Individuals in Maderia are not subject to capital gains taxes when buying and selling Bitcoin, while also touting the region’s 5% corporate tax rate in its free trade zone as one of the lowest in Europe.”

Meanwhile, Bitcoin loses the $40,000 psychological price level as Bitcoin risks further decline to $37K. This current price action has fallen below the expected price level. Nevertheless, on April 1 downtrend; a retraced candle body tested the 50% Fibonacci retracement level. The retracement suggests that Bitcoin will fall to level 2.0 Fibonacci extension or $40,621.90. Bitcoin has fallen to $39,551 as of press time.

How Staking Helps You Make Passive Income From Crypto Investments?