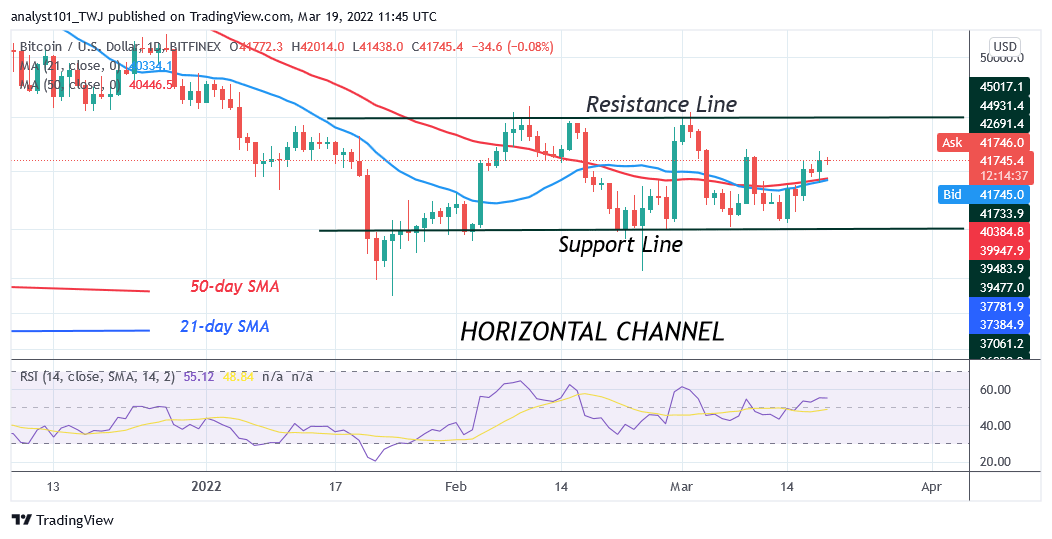 Bitcoin has continued to trade in the bullish trend zone as Bitcoin struggles below $42K. On March 16, BTC/USD’s price rebounded and remained above the $40,000 Psychological price level. The price has stabilized above the $40,000 high with the presence of small body candlesticks called Doji.

Since March 16 price rebound, buyers have been finding it difficult to break above the $42,000 resistance zone. On March 16, buyers were repelled at the recent high as the cryptocurrency slumped to a $40,160 low. The bulls bought the dips as the crypto corrected upward. On March 18 uptrend, buyers pushed Bitcoin to the high of $42,427 but were resisted.

Chamber of Commerce surveys 14% of Business transactions in BTC

According to the Salvadoran Chamber of Commerce, businesses had been slow after the adoption of Bitcoin as legal tender. In retrospect, El Salvador became the first country in September 2021 to officially recognize Bitcoin as a legal tender. The recent survey by the Salvadoran Chamber of Commerce showed that 14% of the 337 companies between January and February 9 have transacted in BTC. The majority of the companies surveyed indicated that Bitcoin adoption in the country has had little impact on their sales.

The surveyed companies include 71% micro or small businesses, 13% classified as medium-sized enterprises and 16% were large companies. Salvadoran President Nayib Bukele has placed Bitcoin near the axis of his economic growth. Although, the International Monetary Fund and Moody‘s Investors Service have warned against El Salvador embracing Bitcoin as a legal tender.

Meanwhile, buyers buy the dips as Bitcoin struggles below $42K. On March 17 uptrend; a retraced candle body tested the 50% Fibonacci retracement level. The retracement indicates that BTC will rise to level 2.0 Fibonacci extension or level $43,938.

Additional 5 Mh/s Hashrate per GPU with this STICKER?