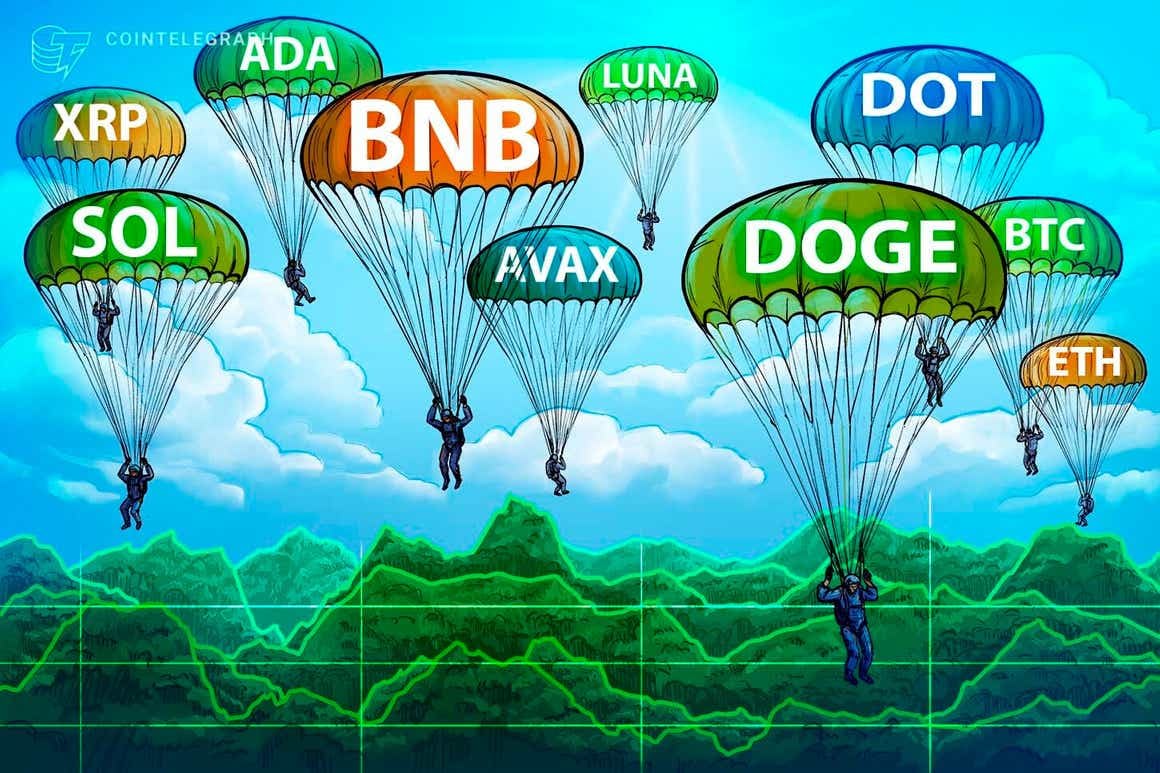 
Bitcoin (BTC) and select altcoins broke above their immediate resistance levels but are struggling to sustain the higher levels, indicating that bears are not ready to give up.

It is speculated that the spike in Bitcoin’s price on March 22 may have been caused by reports that Terra had sent 125 million USDT to Binance on March 21.

This could be the beginning of the proposed $3 billion worth of Bitcoin that the firm plans to purchase. Terra has undertaken another identical transaction on March 23, which could boost sentiment in the near term.

While this news could provide a short-term spike, it is unlikely to alter the main trend. Bitcoin remains strongly correlated with the S&P 500, which rallied sharply between March 15 to 22. Crypto traders are likely to take cues from the performance of the S&P 500 in the next few days.

Could bulls clear the overhead hurdle and start an up-move in Bitcoin and select altcoins? Let’s analyze the charts of the top-10 cryptocurrencies to find out.

Bitcoin broke above the immediate resistance at $42,594 on March 22 but the bulls could not sustain the higher levels. This suggests that bears continue to defend this level aggressively.

A minor positive is that the bulls did not give up much ground from the overhead resistance on March 23. This suggests that traders are not closing their position near the resistance as they anticipate the up-move to continue.

If buyers push and sustain the price above $42,594, the BTC/USDT pair could pick up momentum and rally to $45,400 where the bears may again mount a strong defense.

This positive view will invalidate if the price turns down and breaks below the moving averages. If that happens, the pair could extend its stay inside the $37,000 to $42,594 range for a few more days.

The bears will now attempt to pull the price down to the moving averages. If the price rebounds off this support, it will increase the possibility of a break above the triangle. If that happens, the ETH/USDT pair could start a new up-move. The pair could first rally to $3,500 and then march toward the pattern target at $3,907.

This bullish view will be negated in the short term if the price breaks below the moving averages. Such a move will indicate that the pair may spend some more time inside the triangle.

BNB bounced off the 20-day exponential moving average (EMA) ($389) on March 21, indicating buying on dips. The bulls pushed the price above the overhead resistance at $407 on March 22 but could not sustain the higher levels.

The 20-day EMA has started to turn up gradually and the RSI is in the positive territory, indicating advantage to buyers. The bulls will try to push and sustain the price above the $407 to $410 resistance zone. If they manage to do that, the BNB/USDT pair could attempt a rally to $445.

On the other hand, if the price rebounds off the moving averages, it will suggest that bulls are accumulating at lower levels. The buyers will then again attempt to push the pair to $445.

Ripple (XRP) broke and closed above the downtrend line on March 21 but the bulls are finding it difficult to continue the up-move. This indicates that demand dries up at higher levels.

The price has turned down and the bears are attempting to pull the XRP/USDT pair below the downtrend line. If they manage to do that, the pair could drop to the moving averages.

A strong rebound off the moving averages will suggest that traders continue to buy at lower levels. The bulls will then again try to push the price toward $0.91.

On the contrary, if the price breaks below the 50-day simple moving average (SMA) ($0.76), it will suggest that the break above the downtrend line may have been a bull trap. The pair could then decline to $0.68.

Terra’s LUNA token rose above the overhead resistance at $96 on March 21 but the bulls could not sustain the higher levels. This suggests that bears are defending this level aggressively.

However, a positive sign is that the bulls have not given up much ground from the resistance. This indicates that traders are not closing their positions in a hurry as they anticipate a move higher.

If the price breaks and closes above $96, the LUNA/USDT pair could rally to the all-time high at $105. A break and close above this level could indicate the resumption of the uptrend.

This positive view will invalidate in the short term if the price turns down and breaks below the 20-day EMA ($88). The pair could then decline to $82 and later to $75.

If bulls sustain the price above $1, the ADA/USDT pair could further pick up momentum. The pair could then rally to $1.26. The bears may pose a strong challenge at this level but if bulls overcome this resistance, the pair could extend its rally to $1.60.

Contrary to this assumption, if the price turns down and slides below $1, it will suggest that bears continue to sell aggressively at higher levels. The pair could then drop to the 20-day EMA ($0.89), which is an important level to keep an eye on.

A strong rebound off this level could suggest that bulls are accumulating on dips while a break below the 20-day EMA will indicate that the break above $1 may have been a bull trap.

Solana (SOL) has been sandwiched between the moving averages for the past few days. The bears are selling near the 50-day SMA ($93) while the bulls are buying at the 20-day EMA ($88).

This tight range trading is unlikely to continue for long. If bulls propel and sustain the price above the 50-day SMA, the descending triangle pattern will be invalidated. That could attract buying and the SOL/USDT pair may rally to the overhead resistance at $122.

Contrary to this assumption, if the price turns down and breaks below the 20-day EMA, the bears will try to pull the price to the strong support zone at $81 to $77. A break below this zone will complete the bearish setup, indicating the resumption of the downtrend.

Avalanche (AVAX) has been sustaining above the descending channel for the past few days but the bulls have not been able to resume the up-move by pushing the price above $93. This indicates selling at higher levels.

If the price breaks below the moving averages, the bears could pull the AVAX/USDT pair to the uptrend line. Such a move will indicate that the break above the channel may have been a bull trap.

Conversely, if the price rebounds off the current level, it will suggest that bulls continue to buy on dips. The bulls will then again try to clear the hurdle at $93 and push the pair to the psychological level at $100. A break and close above this level could indicate the start of a new uptrend.

Polkadot (DOT) bounced off the moving averages and closed above the overhead resistance zone at $19 to $20 on March 22. This suggests that the bulls are attempting a comeback.

The DOT/USDT pair could now rally to the overhead resistance at $23 where the bears may mount a strong defense. If the price turns down from $23, the pair could drop to the moving averages and consolidate in a range for a few more days.

If bulls push and sustain the price above $23, the pair could pick up momentum and rally toward $30. Alternatively, if the price turns down and breaks below the moving averages, the pair could slide to the strong support at $16.

Dogecoin (DOGE) has been hovering near the 20-day EMA ($0.12) for the past few days, indicating a tough tussle between the bulls and the bears.

The flattish 20-day EMA and the RSI near the midpoint suggest a balance between supply and demand. This balance could tilt in favor of the buyers if they can push and sustain the price above the 50-day SMA ($0.13). Such a move will signal a likely change in trend and clear the path for a potential rally to $0.17.

Conversely, if the price turns down from the current level or the 50-day SMA and breaks below the March 20 intraday low, the DOGE/USDT pair could drop to the strong support at $0.10.

The views and opinions expressed here are solely those of the author and do not necessarily reflect the views of Cointelegraph. Every investment and trading move involves risk. You should conduct your own research when making a decision.