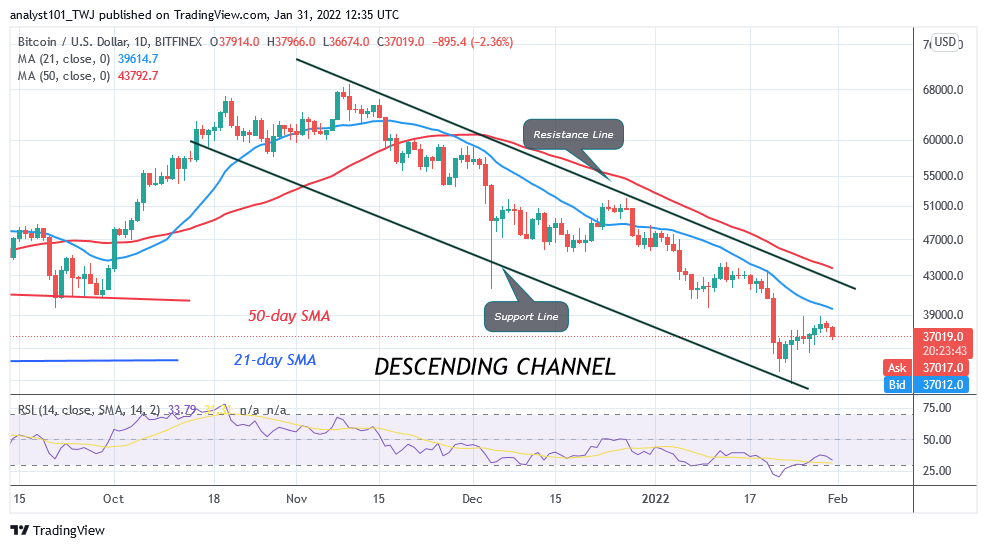 BTC/USD has continued to retest the $38,000 and $39,000 resistance zones as Bitcoin struggles below $39k High. Bitcoin has formed a narrow range below the resistance zones. The price action is formed amidst a bullish expectation. However, if the bullish scenario is invalidated it will have negative consequences on Bitcoin. BTC’s price is trading at $38,565 as of press time.

Bitcoin bulls have continued to retest the $38,000 to $39,000 resistance zones. On January 31 retest, BTC price is now trading in a narrow range below the resistance zones. The cryptocurrency fluctuates between $37,900 and $38,800 price levels. There is a saying that consolidation below a resistance level increases the chances of a possible breakout. Nonetheless, if a breakout occurs, BTC’s price will rally to $44,000 high. Similarly, if a breakdown occurs, Bitcoin will drop sharply to the low of $33,600. However, if the bearish momentum breaks below the $33,600, the crypto may revisit the $30,000 psychological price level.

Institutional investors are re-accumulating Bitcoin using dedicated funds. This is done despite extreme fear in the market as Bitcoin reaches the bottom of the chart. According to reports, there are heavy outflows at the start of 2022. Also, cryptos investment funds have seen a gradual uptick over the past two weeks. This has offered some optimism that the worst of the market downturn had passed. From the records, Digital asset investment products saw $19 million worth of cumulative inflows last week. According to CoinShares, Bitcoin (BTC) and multi-asset funds led the gains with $22 million and $32 million worth of inflows, respectively.

Nonetheless, the BTC price is consolidating below the resistance zones as Bitcoin struggles below $39k High. The cryptocurrency is rising while in a narrow range. It has broken above the $38,000 support but struggles below the $39,000 high. On the upside, if BTC’s price rebounds above the $38,000 support, the crypto will have sufficient grounds to reclaim.