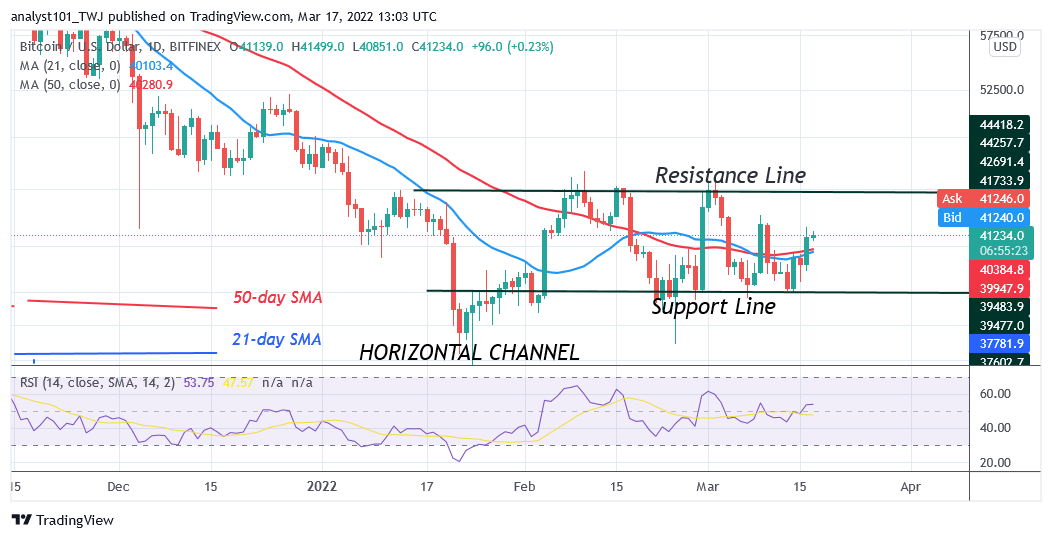 BTC/USD has rallied above the moving averages as Bitcoin repossesses $40K. The largest cryptocurrency is facing stiff resistance at the $41,500 high. It has been retracing from the recent high. A break below the moving averages will cause Bitcoin to resume downward correction.

Yesterday, Bitcoin’s (BTC) price rebounded as it breaks above the moving averages. The bullish momentum could not be sustained as bears sold at every rally. This has been the price action since February 10. As bulls buy the dips, the bears sell at each rally. On the downside, if Bitcoin retraces and finds support above the moving averages, there is every indication that Bitcoin will further rise to retest the $45,000 overhead resistance. BTC price will rally to $50,000 if buyers overcome the $45,000 overhead resistance. However, if the bears break below the moving averages, the market will decline and resume a downward correction. BTC/USD will be compelled to trade between $37,500 and $45,400 price levels.

Louis Nel explained that the wallet address in question has nine other transactions in that wallet. This implies that several others have been duped on that wallet address. The wallet has a value of 0.27 BTC but the funds have not moved. According to a report, Chainalysis estimated that about $500,000 had been stolen on one malware bot in the year 2021. Nel advised that: “When working with Bitcoin and cryptocurrency you are responsible for your security. When copying and pasting wallet addresses, always check the first four to six characters and the last four to six to ensure that they match.”

Meanwhile, Bitcoin trades above the moving averages despite the earlier retracement as Bitcoin repossesses $40K. The retracement has subsided as Bitcoin resumed its upward move. Buyers are to clear the initial resistance at $41,500 to resume uptrend. The crypto is facing rejection in the overbought region.

How Penguin Karts Will Drive the Blockchain Gaming Scene Forward