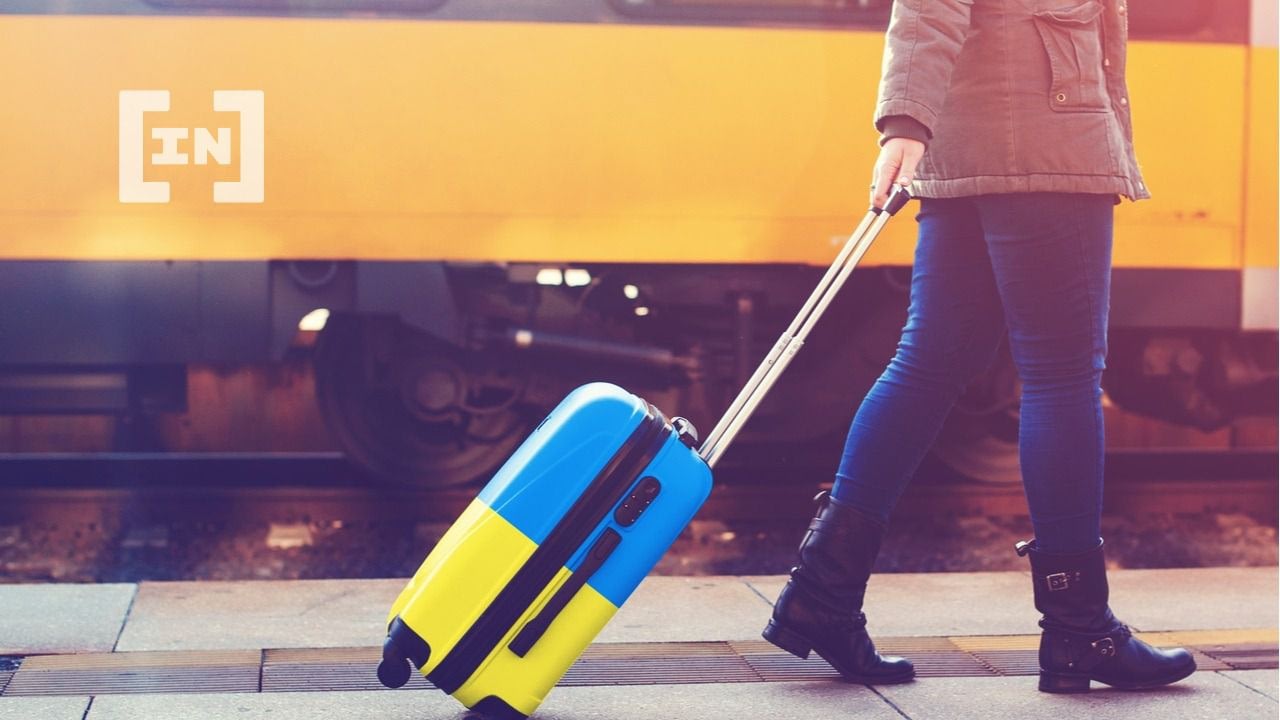 
Ukrainian refugees: With their domestic banks on lockdown, Ukrainians are fleeing across borders with their crypto savings, ensuring their financial survival.

On the day Russia started a war with Ukraine, Fadey woke up at 9 a.m. He had a flood of Telegram messages from friends. They asked him what was happening in Western Lviv, where he lived. After a quick review of the news, he realized that his country was under siege. He decided to flee for the border, aiming for Poland.

Fadey is the pseudonym being used by a Ukrainian refugee who is 20 years old. He needs to protect his privacy. Citizens of Ukraine aged 18 to 60 are drafted into the army. He wanted to escape from front-line service. This meant he had to find a way to cross the border before officials could close it. His girlfriend also needed to escape. To accomplish this, they needed two things quickly: a negative Covid test result and money.

He said, “I couldn’t withdraw cash because the queues to the ATMs were very long, and I couldn’t wait that long.”

Instead, he reached for Bitcoin.

Fadey says he made a peer-to-peer (P2P) exchange with a friend. He transferred $600 in Bitcoin to his friend’s wallet, and his friend gave him US Dollars. He then used the fiat to pay for a bus across the border. The leftover money paid for a night in a hostel for himself and his girlfriend, and some food.

The speed and ease of this cryptocurrency transaction proved crucial. Within two hours of Fadey’s safe passage to Poland, Ukraine closed its borders to all men of combat age.

During his journey across the border, Fadey placed a pen drive in his pocket. It contained 40% of his life savings, about $2,000 in Bitcoin. This pen drive, combined with a unique access code, became the key to his financial survival. He said, “I could just write the password on a piece of paper and take it with me.”

In Poland, there are more than 175 Bitcoin ATMs, allowing refugees who have fled with Bitcoin to withdraw them in cash.

His experience highlights some of Bitcoin’s most important features. Borders don’t limit cryptocurrency. It doesn’t require a bank. Access to it is linked to the owner with a password. All this makes it much more difficult to steal than cash.

Over the past month, nearly a quarter of Ukraine’s population has been forced to flee their homes. The war has strained the country’s financial system. As the invasion progressed, ATMs across the country began to run out of cash. Some people stood in long queues to get their money. When they reached the ATMs, they were charged high fees and were not allowed to withdraw more than $33. They also couldn’t move money online using their domestic bank accounts. The central bank suspended electronic cash transfers on the same day Russia attacked the country.

It was the perfect storm to make the real-life case for cryptocurrencies. Closed borders. A rapidly depreciating currency. The threat of Russia taking over the country. The displacement of the Ukrainian currency – the Hryvnia – in favor of the Ruble. It was an emergency, real-world, scary example of how cryptocurrencies can change survival outcomes.

Brian Mosoff is the CEO of Toronto-based investment platform Ether Capital. He said, “Crypto is a very powerful thing for a group of people who don’t have financial or political stability right now. They are given the opportunity to store their money in some type of asset or product that can basically be kept in a password.”

Within hours of Russia’s attack on Ukraine, the country’s financial system began to show signs of tension. Ukrainian refugees planning to flee were stuck.

Alex Gladstein is the chief strategist at the Foundation for Human Rights, which has been supporting activists in Ukraine since 2009. He said, “Within hours, the country’s economy was gone. Everything was frozen. Suddenly, we were dealing with a wartime economy. This happened within a few days. We are talking about 24 to 48 hours.”

Fadey says he is unable to transfer his fiat-based savings from his Ukrainian bank account to himself in Poland. However, cryptocurrencies have mitigated the effects of this situation.

His crypto stash is mostly in Bitcoin. After that he holds Monero, which he keeps on the Binance cryptocurrency exchange.

Alex Hammond is a free-trade expert at the Institute of Economic Affairs. He spent several months in Ukraine last year and is currently in Poland. He said it was difficult to get money out of Ukrainian banks in the weeks leading up to the invasion. “For weeks before the invasion, most of the Ukrainians I knew actively tried to withdraw as much money as possible from their Ukrainian bank accounts.” He said they transferred funds to British banks, American banks or swapped the funds for cryptocurrencies.

Maria Chaplia, for example, is a Ukrainian citizen currently living in Poland. Initially, she became interested in cryptocurrencies when her Ukrainian bank did not allow her to withdraw a significant amount of money. The fees charged by PayPal were higher than she wanted to pay. “With cryptocurrencies, it was a lot easier.”

In Poland, trying to access money held in Ukrainian accounts is associated with similar difficulties. “Do you want to access your Ukrainian bank account in Poland? Good luck!” says Gladstein.

Even after the laws protecting asylum seekers were introduced, Gladstein warns that most refugees from Ukraine will not be able to simply enter a bank in Poland and open a bank account.

Pablo Villalba is the CEO of the Kimchi Fund, which invests in various cryptocurrencies. He says, “Not everyone has a cryptocurrency wallet. But those who have one treat it like a bank account and make transactions with it in times of crisis.”

Ukrainian refugees and the Bitcoin economy

Long before the war gave Ukrainian refugees a reason to turn to Bitcoin, Ukraine was one of the most progressive cryptocurrency jurisdictions in the world. The country ranks fourth in the world in terms of the adoption of digital assets. Earlier this month, the country passed a bill legalizing cryptocurrencies.

Gladstein said Eastern Europe has long held an interest in digital assets, and Ukraine in particular is a well-known technology hotspot. “There are a lot of Ukrainian stock exchanges, companies and even developers. They all have phones. It is a very well connected, very IT-focused country, probably more so than America.”

This technical knowledge was especially helpful when Ukrainians turned to their cryptocurrency wallets as the only way to access their savings.

Recent advances in payment technology have made cryptocurrency transactions easier than ever. The Lightning Network is a payment layer built on the base layer of Bitcoin that enables virtually instant transactions.

Some Ukrainians use it to facilitate peer-to-peer transactions. Others have found that Lightning is a cheap and fast way to receive donations and remittances from anywhere in the world.

The payment process is simple and takes less than 60 seconds. Users can download an app such as Muun wallet. They then enter a four-digit pin and start sending and receiving cryptocurrency payments simply by showing the QR code.

Said Gladstein, “Sitting in California, I can send you any amount on your phone at any time. We don’t have to worry about being a refugee. It does not matter that you do not have a Polish passport or bank account. None of these things matter.”

Give cryptocurrencies a chance

Constantin Kogan is a co-founder of a blockchain-based gaming ecosystem. Members of his team are located both in Ukraine and Russia. Kogan says that one of his Ukrainian employees remained in place, but sent his wife and children to the border with a cryptocurrency wallet.

The employee was not sure where his family was or which border they had crossed. However, he had a financial security plan: he regularly deposited money into his wife’s cryptocurrency wallet. He keeps most of his net worth (about 60%) in cryptocurrencies, mainly stablecoins.

Chaplia says that many of her friends in Ukraine “have a very, very deep interest in cryptocurrencies.” For her, moving some of the cash to Bitcoin, Ethereum and Tether was like digital gold. It’s a way to safely store cash and forget about it. “I must admit that I used to be skeptical about cryptocurrencies, but because of the war, I had to give them a chance.”

Got something to say about Ukrainian refugees, crypto, or anything else? Write to us or join the discussion in our Telegram channel. You can also catch us on Tik Tok, Facebook, or Twitter.

Bitcoin vs. Altcoins ⚠ | Don't Get Caught Two Steps Behind