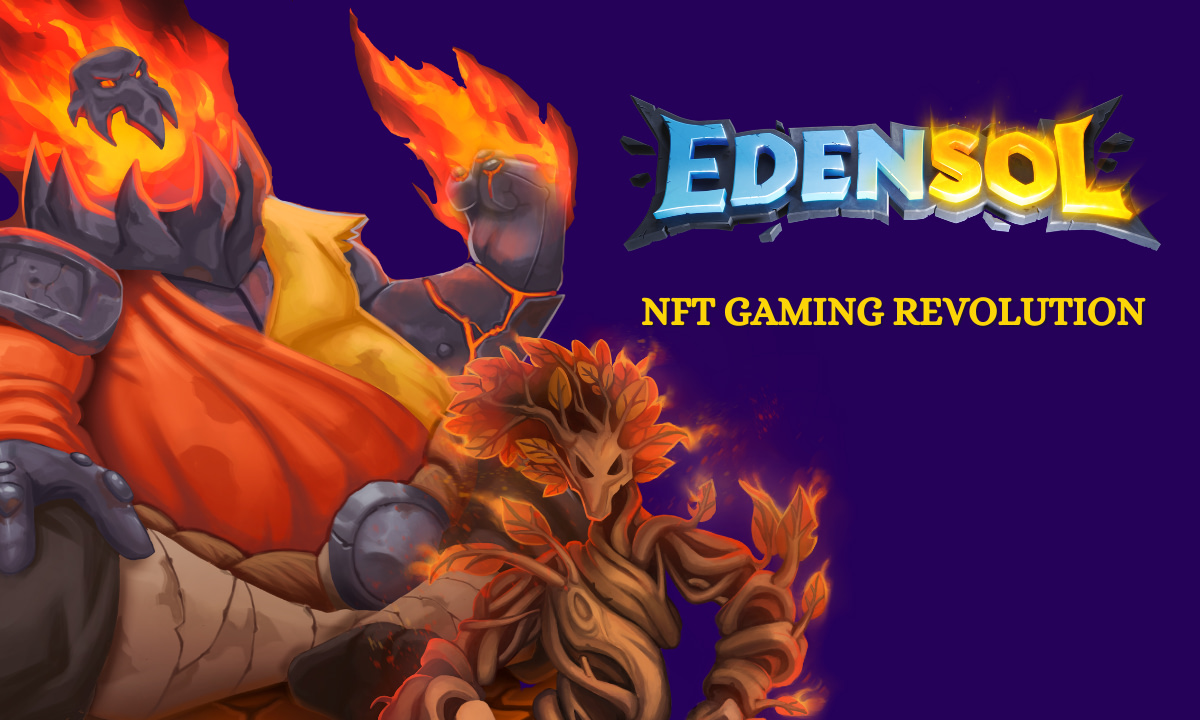 NFT gaming is on fire:

Prices for NFT land plots are estimated to have risen on average 400% to 500% between September 2021 and January 2022.The “big four” NFT metaverses – Decentraland, Somnium Space, Cryptovoxels and Sandbox – will double their NFT revenues in 2022.On February 20th, Axie Infinity, the world’s leading NFT game, announced that it had surpassed $4 billion in all-time NFT sales.

Within the NFT gaming space, an even more powerful trend is emerging: crypto gaming guilds.

They are organized groups of video game players that regularly play together in one or more multiplayer games. By playing various crypto games, a guild accumulates as many NFTs as possible from various sources.

In addition, guilds cultivate promising players and lend them funds and in-game NFT tools so they can unleash their talent – in exchange for a part of their earnings.

Edensol plans to leverage this trend. Guilds are already considered to be the future of play to earn gaming (P2E) and are already attracting enormous investor interest:

Yield Guild Games is the largest gaming guild, with a market cap of over $650 million, and over 4,700 gamers that use the guild’s NFT assets. In August 2021, it raised $4.6 million to invest in NFT in-game assets and to expand its community.Animoca Brands, the parent company of The Sandbox, announced on February 14th that it wold invest up to $30 million in a Guild Accelerator Program to expand the global P2E ecosystem.Ancient8, Vietnam’s largest gaming guild, raised $4 million in January 2022 to democratise access to NFT gaming.

An innovative NFT metaverse game, inspired by the universally captivating Path of Exile and Diablo 3 franchises, is about to take the gaming guild concept to the next level – Edensol.

Edensol is the quintessence of an addictive and highly rewarding multi-player NFT game. Among its unrivaled features:

Addictive Gameplay – Edensol players become Heroes and take on the most terrifying Monsters on adventurous Quests – or can fight 1-on-1 to win valuable NFTs and NSOL token jackpot prizes. This P2E gaming feature allows the best gamers in the world to earn money for their talent, in addition to winning rewards by betting on themselves against other players.

A Wide Range of Valuable NFTs – NFTs in Edensol can be characters, accessories, or land plots. They can be won in battles and tournaments, purchased with NSOLs, and can always be traded on Edensol’s NFT marketplace or on any major NFT exchange (Rarible, Makersplace, OpenSea). By limiting the numbers of NFTs issued, Edensol intends to create a vibrant collectors market and growing interest from NFT gaming guilds

Edensol Guilds – Guilds are a powerful concept that Edensol is unleashing to create one of the largest NFT land metaverses. The idea is simple: Edensol Guilds are groups of players that stake NSOL tokens to occupy land and fight for rare NFTs.

Every Guild becomes a virtual state within the Edensol world and fights other Guilds in tournaments to win valuable NFTs. The most successful Guilds enter a virtuous cycle: they build their NFT land holdings and use them to generate more income in NSOL tokens, which they can then stake to invade the land of rival Guilds. The end result is that savvy and ambitious players can use Guilds to build a virtual land empire, whose value is underpinned by the scarcity of NFT land.

Gamers and investors are just itching to find the next major NFT metaverse to play and invest in. Furthermore, Edensol has created the ideal metaverse of highly attractive NFT rewards that is designed to attract the best gaming guilds – together with their booming financial firepower. Edensol’s electrifying gameplay, unique NFTs, and unparalleled Guild concept are positioning it to make a lasting mark on the NFT gaming world.

Biggest News EVER For Bitcoin & Ethereum!! (All HODLERS Must Watch)