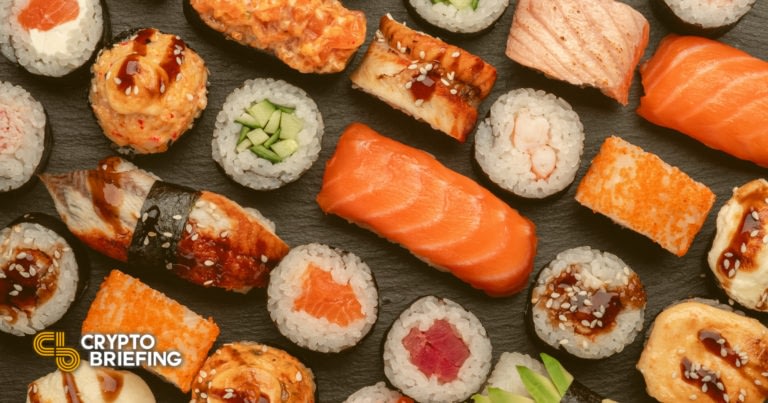 Sushi has launched the first phase of its Trident automated market maker on Polygon.
Users can now create liquidity pools through Trident and migrate liquidity from SushiSwap V1 positions.
More features will be added to Trident in the future pending audits.

Decentralized exchange Sushi has released a beta version of its new Trident automated market maker on Polygon. Sushi touts Trident as a new framework for building and deploying AMMs.

Sushi has started the rollout for its new automated market maker, Trident.

In a Wednesday blog post, the Sushi team announced that a beta version of its long-awaited AMM had been released on Polygon.

Unlike SushiSwap V1, Trident is marketed as a production framework for building and deploying AMMs. Instead of solely managing liquidity pools, Trident lets users create their own pools similar to rival decentralized exchange Uniswap. Additionally, users who already provide liquidity to a V1 pool on Polygon can now migrate their positions to Trident.

“While AMMs can be created using the Trident code, there isn’t a specific AMM at the center of Trident. Instead, there is a framework for creating any AMM anyone would ever need,” the post reads, explaining how Trident’s end goal is to consolidate various types of automated market makers into a single unified interface.

Trident also aims to standardize the way liquidity pools are created using its new IPool interface, which it calls the “crux” of the Trident production framework. “Much like the ERC-20 token standard was needed for token types to become efficient, the IPool standard is needed to make pool types more efficient,” the post states.

Trident was first announced in July 2021, but its release has been subject to several delays amid internal conflict in the Sushi development team. The new protocol aims to replicate several of the most popular DeFi applications launched on Ethereum and combine them into a single protocol.

Firstly, Trident will expand its pool options to let users create their own liquidity pools and provide concentrated liquidity, similar to the experience of using Uniswap V3. It will also replicate the weighted pools pioneered by Balancer so that users can contribute liquidity in different weighted amounts instead of forcing them to provide a 50:50 split of two assets. Finally, Trident will implement hybrid pools to improve swapping between like-kind assets such as stablecoins. Trident also aims to reduce the gas costs for using the exchange by introducing a new routing engine for swaps.

Trident’s beta launch on Polygon doesn’t yet feature all the improvements promised when the project was announced last year. Sushi states that the current preview marks the first phase of deployment and that new pool types will be released “in the order that the audits and available resources make them available.” In addition to the planned new pools, Sushi has also said that users will be allowed to create and deploy their own pools types on Trident, as long as they passes an audit and an internal review.

Like all other protocols in the Sushi ecosystem, a portion of the trading fees generated through Trident will be sent to xSushi token holders.

Disclosure: At the time of writing this piece the author owned ETH, SUSHI, and several other cryptocurrencies.

Earning High Yields Without the Complexity of DeFi? Welcome to Hodlnau…

One of the most popular trends in cryptocurrencies dates back to ancient times: lending money to earn interest. In the traditional banking system, people store their funds and they get…

It’s thought that Daniele Sestagalli may step into the project as part of an internal restructure.  Sushi Rebounds From Recent Woes  Sushi is leading the market.  The DeFi project’s SUSHI…

Leading decentralized exchange Sushi has announced a joint liquidity mining program on the Celo network, with $12.6 million worth of CELO and SUSHI to be distributed as rewards.  Sushi Partners…