In Georgia, crypto is a crucial tool for refugees escaping the war – Cointelegraph Magazine 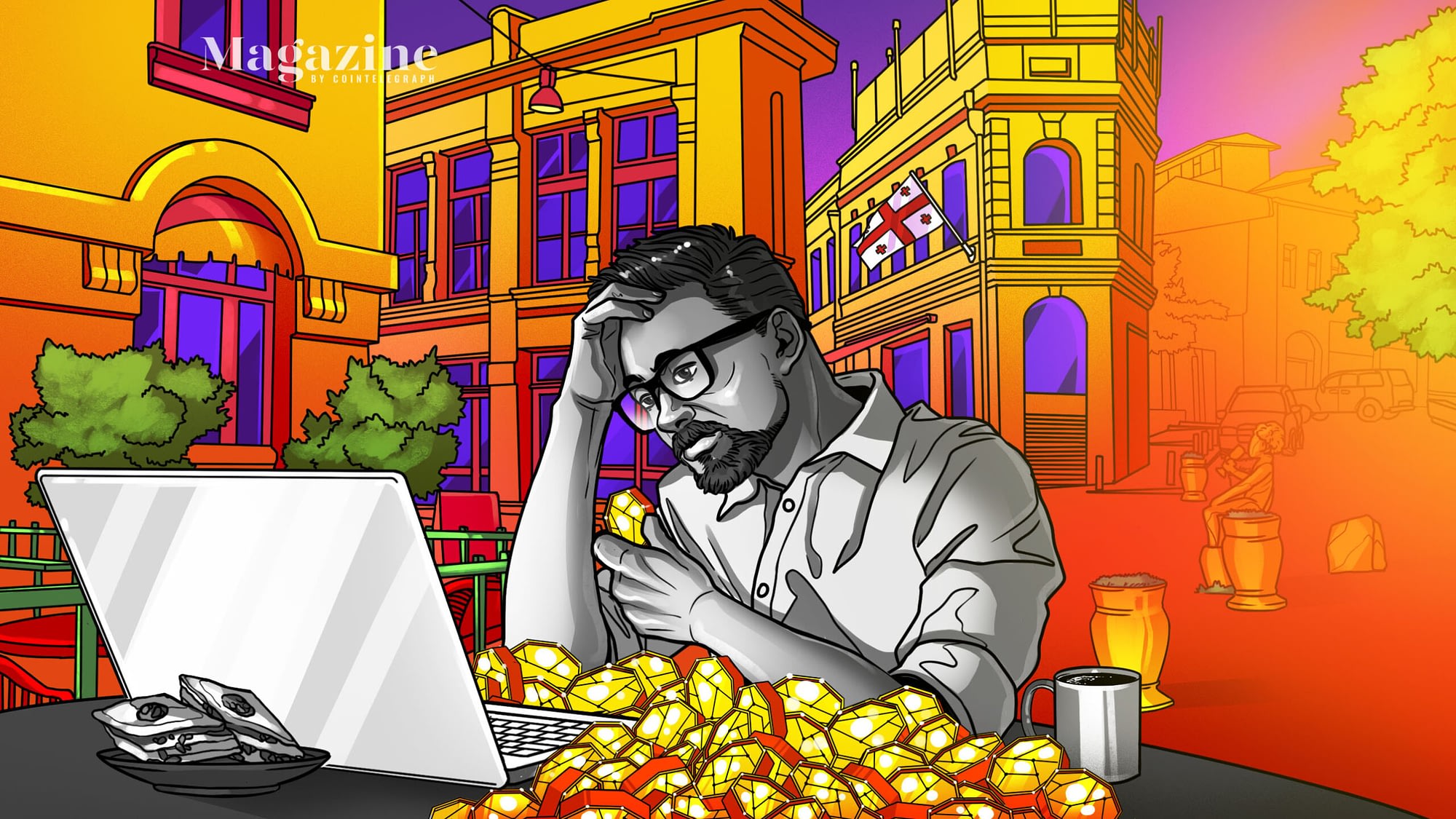 
I arrived in Tbilisi, Georgia, near Russia’s southern border, in late February — just a few days after Russian forces invaded Ukraine. I had been reporting on crypto and blockchain from St. Petersburg, but after the war started, staying there had become untenable. During my first week in the city, I searched for an apartment to rent and for ways to set up a basic bank account.

I went to a major branch of the Bank of Georgia, the second-largest private bank in the country, next to Liberty Square in the city center. The bank had only been open for an hour, but it was already full of people waiting to meet with a banker.

As I entered, a visibly frazzled teller at a help desk asked me point blank, “Russian?” I said no but that I wanted to open a bank account. She handed me an application form, a piece of receipt paper with a number on it, and told me to wait my turn.

While I waited, filling out the bank application, I noticed that no one who was holding a red passport — i.e., a Russian passport — had been handed application forms. I watched Russian clients approach the bank windows. Each was invariably handed a long list of required documents they must produce in order to open a standard bank account with a debit card. The list included six months’ worth of transaction records, translations of passports, and a copy of a work contract.

I began to worry because, as far as I was aware from my own research, none of this was previously required. As I approached the window, the banker reflexively reached for a copy of the list of required documents — until I showed my American passport. Within a half-hour, my application was processed, and the banker told me to stop by the next day to pick up my card.

Money issues are further complicating the lives of Russians and Belarusians who have come to Georgia to escape draconian crackdowns at home. Telegram channels devoted to Russians relocated abroad are flooded with questions about how and when people were able to move their money.

Sanctions from major banks, payments firms and card issuers such as Mastercard and Visa, in addition to strong capital controls at home, have left Russians in Georgia with little means to access their savings in Russian banks.

They face further difficulties at Georgian banks, where once relatively lax requirements for opening a bank account have been replaced by intensive Know Your Customer procedures for hopeful clients.

Reports surfaced on social media of some banks requiring Russian and Belarusian applicants to make sworn statements that Russia is the aggressor in an illegal war on Ukraine, recognize Abkhazia and South Ossetia as parts of Georgia, and swear to counteract propaganda.

Given recent laws about “anti-Russian propaganda” and disseminating misinformation about the “special operation” in Ukraine, signing such a statement could constitute a crime if the signatory returned home to Russia.

Some Russian friends who know I work in crypto media asked me if there was any way to use crypto to access their funds.

Buying crypto is still largely unregulated in Russia, with small exchanges requiring only very basic KYC procedures, if they require them at all. And since any transactions via bank card still happen within Russian territory, residents needn’t worry about sanctions on credit card companies when buying crypto on a local exchange.

These small exchanges were quick to catch on to the spike in demand, and many were selling major coins like Bitcoin and popular dollar-based stablecoins like Tether at premium prices, some well above their adjusted value in dollars.

But smaller, less popular coins like Litecoin were still relatively fairly priced in the first two weeks following the onset of the war. One friend shifted the majority of their savings into Litecoin via a Russian online exchange. Once their phone-based wallet pinged them with a notification that they had received their LTC, they went straight to one of several physical crypto exchanges in Tbilisi to sell their coins for dollars.

I, myself, ventured to one such exchange to sell some Ether for cash. On its website, the firm maintained its apolitical status and compliance with Georgian law. I’m not really sure what I expected to see when I arrived, but what I found was a rather humble affair.

The small room in the crowded office building in the city center had two desks and a few chairs for clients to relax while block confirmations went through. In the single window, neon Bitcoin, Litecoin and Tether signs glowed. Miniature Georgian and Ukrainian flags were stuffed into the potted plants.

As I arrived, a small group of clients speaking Russian were leaving, thanking the two staff who sat at their respective desks. The staff asked how they could help me, and I said I would like to sell some crypto.

They gave me an address, and I sent the crypto. After the transaction was confirmed, a cash counting machine whirred, spitting out the exact amount in U.S. dollars, which the staff carefully counted again on the desk in front of me. The whole process took about 10 minutes.

I was not once asked about my nationality, ID or business in Tbilisi.

Dollars in hand, I made small talk with the staff. The operators of the exchange, who prefer to remain anonymous, said that the vast majority of their customers in recent weeks had been Russian or Belarusian and that the flow of clients had been more or less nonstop.

This was just one of several physical crypto exchanges in the capital of Georgia, which maintains laissez-faire laws on cryptocurrency. It has no licensing scheme for crypto trading, and crypto traders do not have to pay tax on income or gains. The sale of crypto and hashing power both abroad and domestically is also exempt from the country’s value-added tax.

The capital city of just over 1 million residents has found it difficult, both materially and politically, to absorb the thousands of new arrivals from Ukraine, Belarus and especially Russia.

And while many of the city’s cryptocurrency-centric businesses observe a live-and-let-live approach to their clientele, many other businesses and services are outright discriminatory.

Take one example: Much of the city’s residential rental property was snatched up in the weeks leading up to and following the start of the conflict. Now, well over a month into the war, there’s little to choose from for the crowds of Russians who are still arriving.

Supply issues aside, Russians also face discrimination from landlords. When contacting real estate agents in the city, the first question I invariably faced, even as an American, was, “Are you Russian?” — followed by something like, “We will need to see your passport before we can move forward.” Several real estate agents I spoke to said landlords have a “no Russians” policy.

In a local cafe, I overheard an exasperated Russian man talking on his phone to someone I assumed was a real estate agent. He rattled off a list of requirements — like the number of bedrooms, the price range, needing a stove and washing machine — that he’s desperate to find:

“My wife and I are renting a room in the city center right now, and she is hysterical. She says there’s nowhere to cook, no washing machine to clean our clothes. She says she wants to go back. I say, ‘What do you mean go back? We can’t go back, not for anything. We’re here…’”

While I can’t approve of such outright discrimination, I can understand how it came about.

In 2008, Russia supported separatists in the Georgian breakaway regions of Abkhazia and Tskhinvali, now known by many as South Ossetia. The subsequent war in August 2008 lasted 12 days and left many areas bombed out and scarred. Years later, the conflict has given the Georgian people a strong sense of solidarity with Ukraine, and bitter resentment toward Russia. 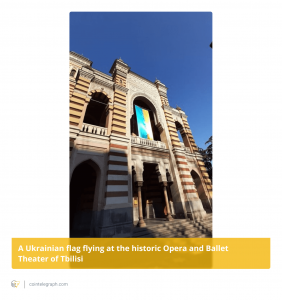 An instrument, not a solution

Almost all of the Russians I have met in Tbilisi have used crypto to move at least some part of their savings. And while this initially seems like a success story — a time for crypto to shine as the decentralized future allowing people to control their own savings — I think it is important to zoom out.

Cryptocurrencies, like any other technology, are only as good or as useful as the people and human institutions who surround and implement them. While many libertarian-minded crypto-maximalists will no doubt laud the technology and its apolitical design amid this Russia-Georgia context, the only thing allowing it to be successful is the people and businesses on both ends of the transaction connecting traditional financial systems to blockchain-based, decentralized ones.

If the Russian government required exchanges to implement more robust KYC protocols — as they do with bank accounts and foreign currency transactions — citizens could not buy crypto, or they’d be severely limited in how much they could buy and subsequently save.

If the Georgian government required exchanges to follow the same robust, almost impossible KYC measures that private banks are currently implementing, it would be incredibly difficult for Russian immigrants to sell their crypto in order to pay rent, buy food and organize transportation.

If the exchange operators allowed their political stance to determine their clientele, the crypto-owning public could find their options for buying, selling and withdrawing assets further limited.

Crypto, like most other new tech praised upon its creation as apolitical or neutral, becomes political in the hands of the people who use it and regulate it.

Aaron Wood is an editor at Cointelegraph with a background in energy and economics. He keeps an eye on blockchain’s applications in building smarter, more equitable energy access globally.

The opinions expressed are the author’s alone and do not necessarily reflect the views of Cointelegraph or its affiliates. This article is for general information purposes and is not intended to be and should not be taken as legal or investment advice.