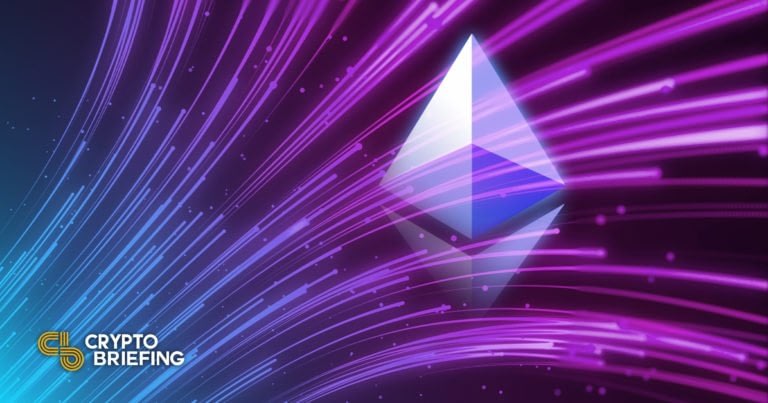 Ethereum developers have slated a September 15 to 16 target date for the network to complete “the Merge” to Proof-of-Stake.
The number one smart contract network completed its final test run for the update on the Goerli testnet today.
The landmark event has become a leading narrative in the crypto space in recent weeks, and ETH has benefited from the hype.

The most anticipated crypto event of the year has a tentative launch date.

On a Consensus Layer Call today, developers set an estimated mainnet launch of September 15 to 16 for “the Merge.” The Ethereum Foundation’s Tim Beiko later confirmed the update in a tweet, confirming a targeted Total Terminal Difficulty of 58750000000000000000000.

The Total Terminal Difficulty refers to the difficulty required to mine the final Ethereum block. At that point, the network will turn off Proof-of-Work and move to Proof-of-Stake. An upgrade called Bellatrix is scheduled to go live on September 6, and the second part of the Merge, dubbed Paris, is scheduled to land when the TTD hits 58750000000000000000000. That’s expected sometime between September 15 and 16.

Though the date could theoretically change should any issues arise, it’s the clearest sign yet that Ethereum is about to move forward with its long-anticipated move to Proof-of-Stake.

The number one smart contract blockchain completed its final test run for the Merge on the Goerli testnet earlier today, bringing the network another step closer to the event itself. Beiko had previously suggested a provisional September 19 launch date, though that was never set in stone.

Barring any final hurdles, Ethereum will “merge” its Proof-of-Work mainnet and Proof-of-Stake Beacon Chain between September 15 and 16, moving the network onto a Proof-of-Stake consensus mechanism. The upgrade is expected to bring several benefits, including a 99.9% reduction in energy consumption and a 90% ETH issuance cut since the protocol will no longer need to pay miners to add new blocks to the chain (they’ll be added by validators staking their ETH instead).

Proof-of-Stake Ethereum has been discussed since as early as 2014, but it famously suffered years-long delays. Several key crypto projects and the Ethereum community itself have widely supported the update, though in recent weeks some crypto advocates have developed a plan to fork a Proof-of-Work version of Ethereum to preserve an ecosystem for miners. TRON’s Justin Sun and the prominent miner Chandler Gou are among the biggest advocates for the fork plan, though their plans have not yet been finalized. USDC and USDT issuers Circle and Tether have said that they’ll support the Merge rather than a Proof-of-Work fork.

As the Merge has drawn closer, it’s become a dominant narrative in the crypto space in recent weeks. Ethereum’s creator Vitalik Buterin went as far as to say that he thought the Merge narrative was “not priced in” last month, though he specified that he was referring to the psychological impact of the event rather than the crypto market.

Still, whenever the market has picked up over recent weeks, ETH has tended to lead the rallies. It’s currently trading about 100% off its June low when it fell below $900 amid panic over Three Arrows Capital’s catastrophic implosion. It rallied past $1,900 today following the Goerli testnet launch.

ETH is currently trading just under $1,900, putting Ethereum’s market cap at $227.3 billion. Its global cryptocurrency market capitalization dominance is about 18.8%.