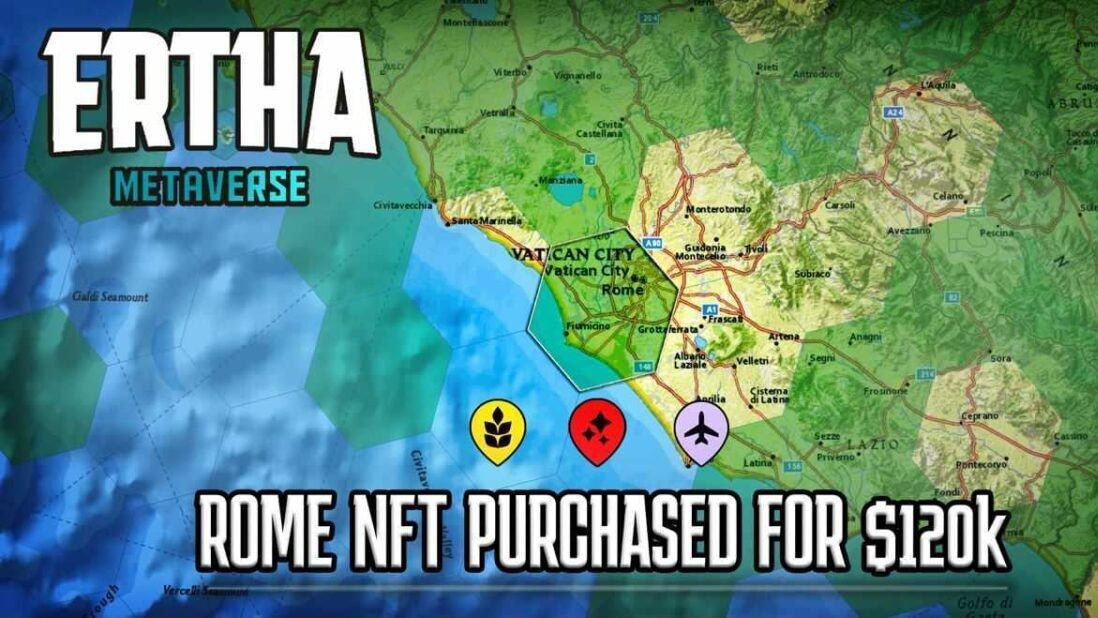 
Ertha Metaverse looks unstoppable on its path to becoming the industry’s top metaverse. The project is already recognized as having one of the most-searched-for tokens in GameFi and at the time of writing, holds a fully diluted market cap in excess of $380 million. Today its developers have announced that a new sales record has been set.

Rome no longer belongs to the Romans, but to the buyer who spent $120,000 for the privilege to call one of Europe’s most famous cities their own. Not only do they now have control of world-famous landmarks such as The Colosseum and the Trevi Fountain, but also Vatican City, the home of the Pope, and its famed Sistine Chapel.

This exceeds previous highs that were set for Tokyo, which sold for $59,000, and the majority of Sweden, which a single buyer purchased for $50,000.

To some, these might seem like eye-watering amounts to spend on digital plots of land. However, each plot, especially those with the higher prices, comes loaded with resources that can be exploited to generate its owner revenue in the form of $ERTHA tokens. The Metaverse is divided into 360,000 purchasable land plots, each of which collects taxes, fees, and other forms of revenue from the transactions taking place on them.

With Ertha’s trajectory continuously on the up, Rome’s purchase price might not seem so high once the game is live and hundreds of thousands of players flood into its playspace. Investors looking to buy into the hype surrounding metaverses and Play-to-Earn gaming should look no further than Ertha Metaverse.

The games marketplace, an interactive globe, is being updated continuously with land in new countries being released daily. Prospective landowners shouldn’t hesitate. Buyers are ready and waiting to snap up land the moment it becomes available.

There is still much to look forward to with an exciting list of improvements and additions approaching in Ertha’s roadmap.

In Ertha, mankind finds itself on the brink of extinction. World leaders failed with their last-ditch attempts at saving Earth, and in the years that followed untold natural disasters devastated the planet.

Players are given the opportunity to right the wrongs of our past by building a new world, from the ground up. Extract resources, develop land, re-build economies, and re-form countries and their governments in the way they see fit. Each player’s actions can have lasting impacts within an ever-evolving metaverse.

Ertha’s world is a complex and intricately designed playspace ripe for the creation of new governments, economies, and shaky alliances between its player base. Players must balance production, trade, and financial budgets, in order to stay one step ahead of the competition.

For those looking for an introduction to Metaverses and play-to-earn gaming, Ertha represents an opportunity like no other.

What is the $ERTHA token?

The $ERTHA token will play an essential role for anyone serious about entering the Erthaverse. As a game of economic and political intrigue, the token has various uses for players. Use $ERTHA to influence in-game political policies, purchase land, develop real estate, and much more.

However players decide to use them, $ERTHA tokens will have a real impact on each player’s influence within the Erthaverse!

Ethereum: Your Best Chance To Be A Millionaire in 2021