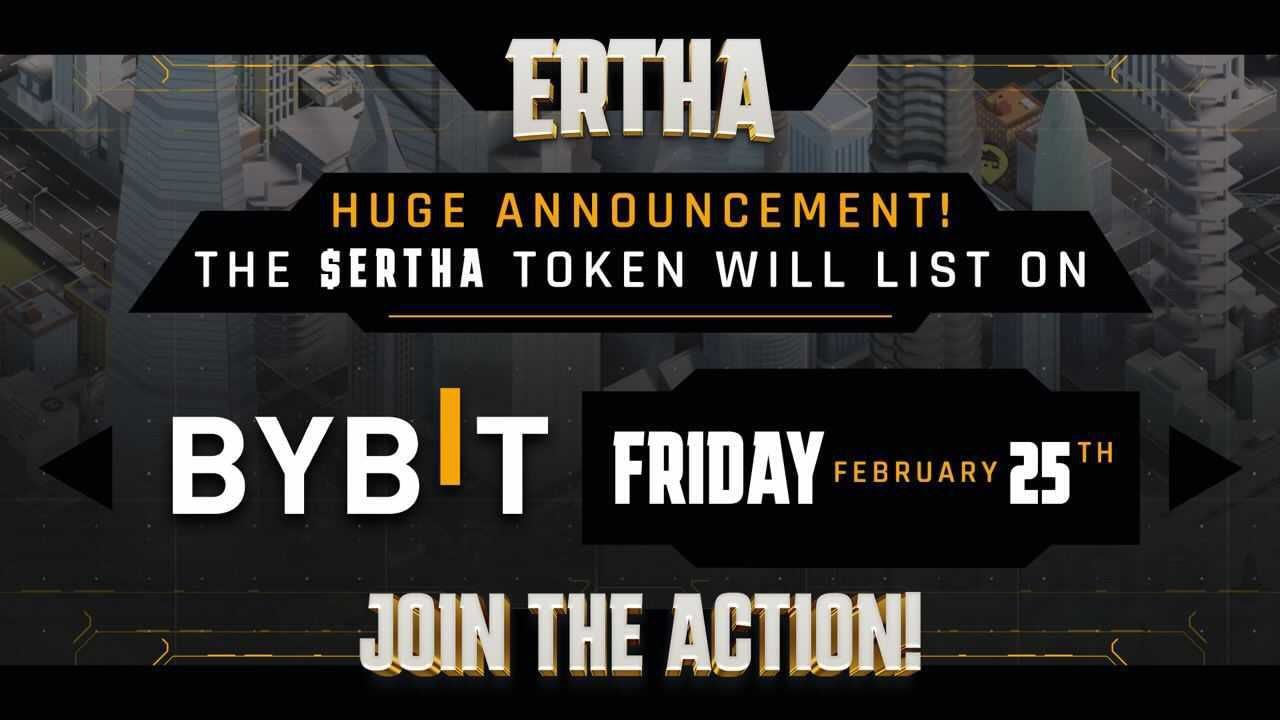 Ertha metaverse, one of blockchain gaming’s most talked about metaverses, has today announced the listing of the ERTHA token on another of the crypto industry’s top exchanges – ByBit.

With over 5 million registered users across the globe, ByBit is a fantastic fit for Ertha.

In addition to being one of the fastest-growing cryptocurrency derivatives exchanges, ByBit provides an efficient, transparent, and innovative trading environment for its users.

By listing on ByBit during challenging market conditions, Ertha aims to strengthen its position as one of the leading metaverse tokens.

The project will continue expanding its availability to potential investors and keep momentum as its development team seeks to launch 2022’s biggest metaverse.

Ertha’s nft sales remain largely unaffected by the wider industry troubles and have already sold over 22,000 of their revenue-generating land plots.

Clearly, the hype surrounding metaverse projects shows no sign of slowing down, and plenty of wealthy investors have already made Ertha their metaverse of choice.

The game’s founding landowners have an exciting month ahead of them, with the initial Ertha beta set to launch in late march.

In Ertha, mankind finds itself on the brink of extinction. World leaders failed with their last-ditch attempts at saving earth from its rapidly changing climate, and in the years that followed, untold natural disasters devastated the planet.

Players are given the opportunity to right the wrongs of our past by building a new world from the ground up.

Extract resources, develop land, re-build economies, and re-form countries and their governments in the way they see fit. Each player’s actions can have a lasting impact within an ever-evolving metaverse.

Ertha’s world is a complex and intricately designed playspace ripe for creating new governments, economies, and shaky alliances between its player base.

The metaverse is divided into 350,000 purchasable land plots, each of which collects taxes, fees, and other forms of revenue from the transactions taking place on them.

Players must balance production, trade, and financial budgets, in order to stay one step ahead of the competition. For those looking for an introduction to metaverses and play-to-earn gaming, Ertha represents an opportunity like no other.

What is the ERTHA token?

The ERTHA token will play an essential role for anyone serious about entering the Erthaverse. As a game of economic and political intrigue, our token has various uses for players.

However you decide to use them, the ERTHA tokens you hold will have a real impact on your influence within the Erthaverse.

URGENT WARNING to ALL Bitcoin, Ethereum, & Cardano Holders in 2021