Bulls and Bears Reach Indecision as Bitcoin Remains Above $40K 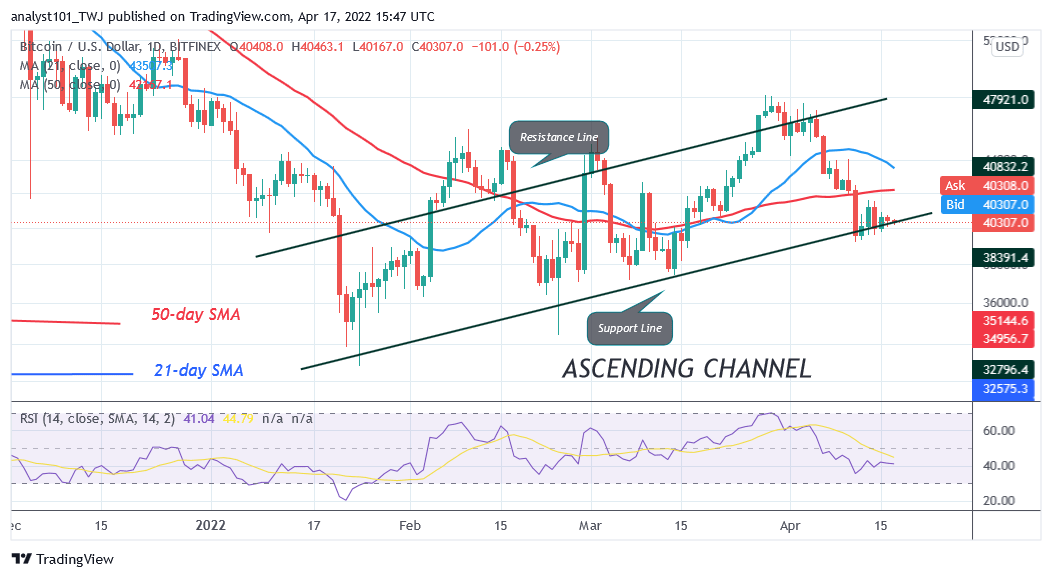 Bitcoin’s (BTC) price has begun a series of sideways moves as Bitcoin remains above $40K. BTC/USD is in a range bound move between levels $39,223 and $41,500. BTC’s price is now consolidating in the middle of a price range. Since April 14, the price action is characterized by small body candlesticks called Doji.

Since April 11, the selling pressure of Bitcoin has subsided as it fell to a low of $39,223. For the past week, Bitcoin has been trading above the $40,000 psychological price level. The cryptocurrency is not trending upward, and the price has been stable above the current support. This is because the price action is characterized by small body candlesticks called Doji and Spinning tops.

The appearance of these candlesticks will compel the BTC price to remain stable above the current support. The price movement has been marginal. These candlesticks are indicating that buyers and sellers are undecided about the direction of BTC price. However, if the bears break below the $39,000 support, the market will decline to $37,000 low. Also, Bitcoin will resume an uptrend if price rebounds above the current support and breaks above the $41,500 high.

Mike Peterson is one of those people who funded the Bitcoin Beach project and encouraged crypto adoption among the residents. In a 60-minute CBS news show, Sharyn Alfonsi, a journalist, interviewed Mike Peterson about the Bitcoin Beach Project. According to a report, a crypto-friendly area of El Zonte is a village located in El Salvador where residents and visitors have been able to use Bitcoin (BTC) to pay for anything from utility bills.

According to the Chamber of Commerce, about 90% of companies indicated that Bitcoin adoption had little impact on sales. Also, a survey showed that only 14% of respondents said they had transacted in BTC since El Salvador’s Bitcoin Law came into effect. Meanwhile, this has not deterred the nation to make progress with the Bitcoin low. There is another report on the creation of Bitcoin City, a project funded by BTC bonds and powered in part by geothermal energy from volcanoes.

Meanwhile, Bitcoin has continued to consolidate above the current support as Bitcoin remains above $40K. BTC price movement is insignificant because of the appearance of small body candlesticks. A price rebound or breakdown is expected as the market continues its consolidation.