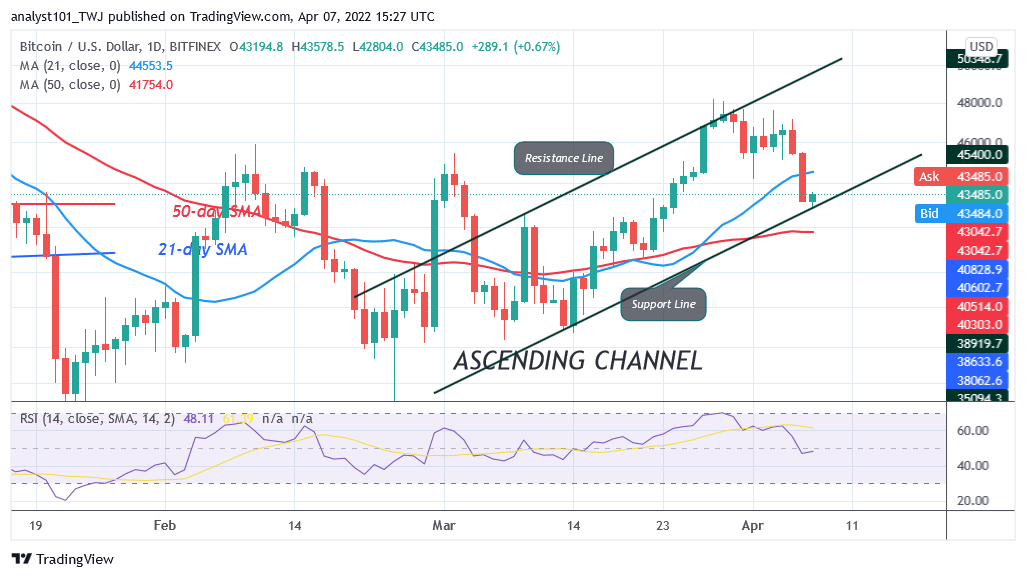 Today, BTC/USD has declined to $43,162 as Bitcoin faces rejection at $43.9K. The decline is likely to extend to the $40,000 psychological price level. This is because Bitcoin has fallen to the bearish trend zone. The cryptocurrency is hovering above the $43,000 support for a possible downward move.

Following the rejection from the $48,000 overhead resistance, Bitcoin has resumed selling pressure. Buyers have failed to keep BTC’s price above the $48,000 resistance level. The largest cryptocurrency fell below the 21-day line SMA but above the 50-day line SMA. This indicates that Bitcoin is likely to be range-bound between the moving averages.

Today, the bears have broken below the breakout level of $45,400 as Bitcoin fell to the low of $43,475. Sellers will attempt to push Bitcoin to the previous lows. In previous price action, the bears pushed BTC’s price to the low above $37,000. On the upside, if the bears break below the 50-day line SMA, Bitcoin will decline and find support above $37,000. On the other hand, the BTC price will rally to $48,000 overhead resistance, if the 21-day line SMA is breached.

Meanwhile, the BTC price has fallen to the low of $43,162 as Bitcoin faces rejection at $43.9K. The upward correction is facing rejection at the high of $43,901. The selling pressure will resume if the current support is breached. Sellers will attempt to push Bitcoin to the low of $37,000.