BTC/USD Stuck below $45K High as Bitcoin Risks Another Decline 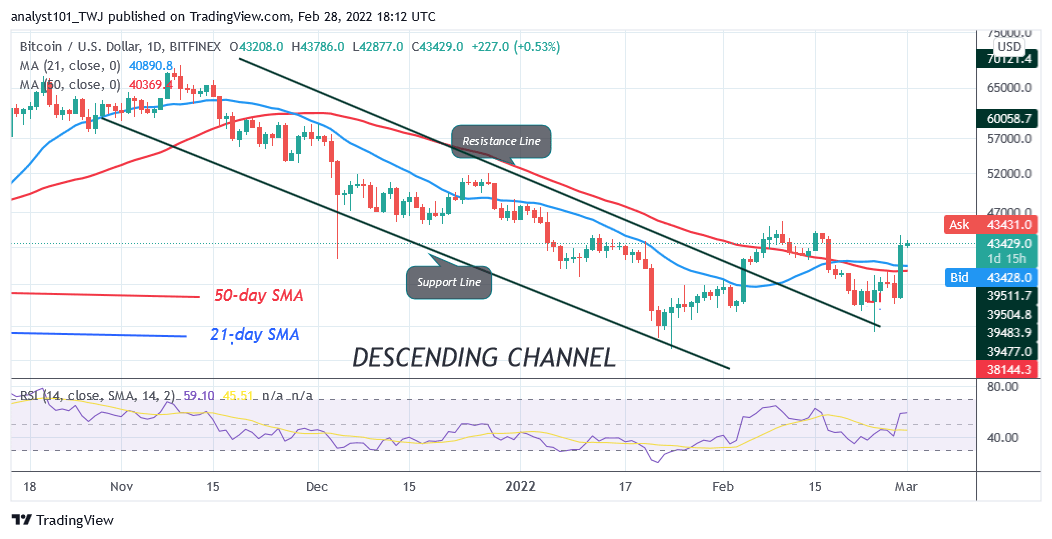 BTC/USD is hovering above the $43,500 support as Bitcoin risks another decline.The bears are putting up a strong defense at the $45,000 overhead resistance. Bitcoin will be compelled to a range-bound move if the retracement is above the moving averages. The downtrend will resume if price falls and breaks below the moving averages.

Following the recent price rebound, the BTC price uptrend is facing resistance at the high of $44,952. Buyers fail to keep the price above the $45,000 overhead resistance. Besides, the bulls are attempting to clear the resistance zones between the $39,000 to $40,330 price levels. Buyers cleared the resistance zones but were unable to breach the $45,000 overhead resistance. BTC price has retraced and the crypto is hovering above the $43,500 support. On the upside, a price rebound above $43,500 support will breach the overhead resistance. This will catapult Bitcoin to rally above the $50,000 psychological price level. Nonetheless, if the bullish scenario is invalidated the bears will attempt to push Bitcoin to the previous low at $36,000 and later to the $32,000 low.

Mykhailo Fedorov is the minister of the digital transformation of Ukraine. The minister has appealed to the global cryptocurrency exchanges to block addresses of Russian and Belarus users. According to reports, Fedorov’s appeals could cause a damaging effect on the Russian cryptocurrency market. The Russians were believed to hold more than $200 billion in crypto as of early February. However, some platforms have frozen accounts linked to Russia and Belarus while Binance has not blocked innocent Russians’ crypto assets.

According to the spokesman of Binance, freezing Russian assets will contradict the cryptocurrency’s main principles of financial freedom. In his words: “We are not going to unilaterally freeze millions of innocent users’ accounts. Crypto is meant to provide greater financial freedom for people across the globe.” Also, the spokesman indicated that sanctions are against entities in Russia while “minimizing the impact to innocent users.” “Should the international community widen those sanctions further, we will apply those aggressively as well,”

Meanwhile, BTC’s price is consolidating above the $43,500 support as Bitcoin risks another decline . Bitcoin is above the 80% range of the daily stochastic. It may decline in the overbought region as sellers emerge.

Crypto Casino of the Year BC.GAME Launches Its All-New Redesigned Website With Better…