BTC/USD Consolidates at Lower Levels as Bitcoin Bounces Above $38K 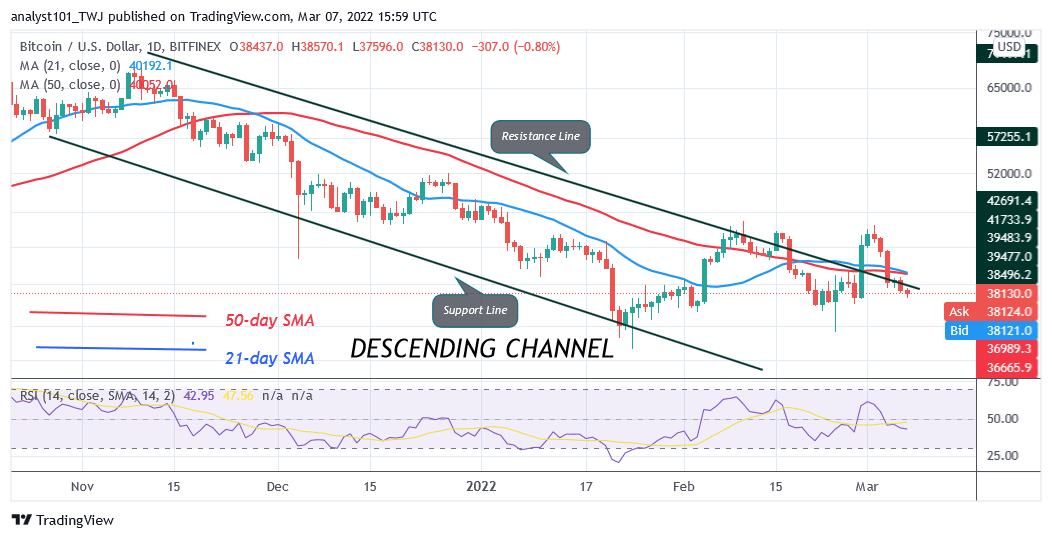 BTC/USD is still in a downward correction as Bitcoin bounces above $38K. Since March 4, BTC’s price has been hovering above the $38,000 support for an upward move. Today, BTC’s price declines and pulls back after retesting the low of $37,181.

Following the breaking of the $39,000 crucial support, BTC price has continued to decline to the downside. The largest cryptocurrency is expected to decline to the low of $36,500. The bearish momentum will continue to the low of $33,800 if Bitcoin loses the previous support. Today, BTC’s price is trading at $38,628 as of press time. The cryptocurrency has been fluctuating above $38,000 for the past five days. However, if the $38,000 support holds, the February 28 price action may repeat itself. Bitcoin will rebound and break above the moving averages. The bullish momentum will extend and retest the $45,000 overhead resistance. A breakout at the overhead resistance will signal the resumption of upside momentum. Bitcoin will rally to the $50,000 psychological price level. Today, BTC price is rising after retracing to the low of $37,181.

An Auction House, Phillips Intends to Auction a Basquiat Painting in May for BTC or ETH

Phillips is a leading United States auction house and will be auctioning a Jean-Michel Basquiat painting in May. The showstopper 16-foot painting, “Untitled, 1982,” is “estimated in the region of $70 million” (roughly 1,650 BTC or 25,513 ETH) and will go under the hammer in New York City on May 18. The auction house has listed Bitcoin and Ether as an accepted payment options. Scott Nussbaum is a senior international specialist for 20th-century and contemporary art at Phillips. Scott indicated that buyers “are interested in the option of cryptocurrency as a method of payment for traditional artworks. The interest in cryptocurrency and NFTs from the traditional art world is growing rapidly. And though it’s impossible to predict the future, we believe the intersection of digital and traditional art worlds will only continue to flourish.”

Meanwhile, BTC’s price is holding above the $38,000 for a possible upward move as Bitcoin bounces above $38K. A further downward move is unlikely. BTC/USD is unlikely to revisit the previous lows of January 24 and February 24. Nonetheless, Bitcoin reached the low of $32,937 rebounded.